Let’s Be Thankful: Adventures In Tofurky 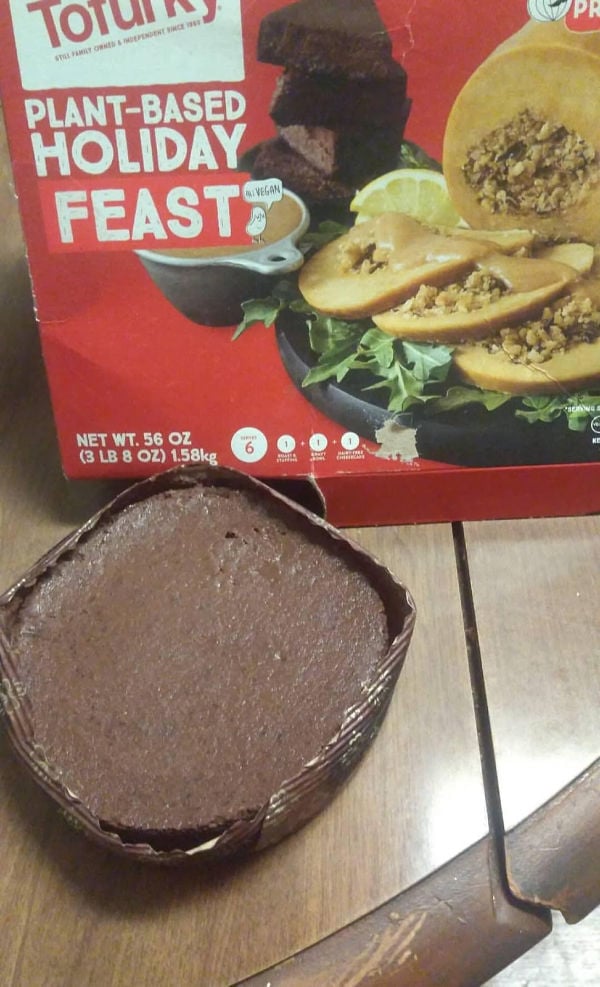 I am not a vegan or a vegetarian. (Not that there’s anything wrong with that.) I DO have serious protein-based allergies. I know there are plenty of people with egg allergies, but I have only encountered one other person who had a poultry allergy.

As a result, for Thanksgiving, my family has a roast of some kind. No one’s going hungry and no one’s complaining (at least not that I can hear).

But I do feel bad/guilty that our family does not have a traditional meal. When my brother was alive, he’d put together a care package for my husband. And there were times when my husband would make a pre-Thanksgiving turkey kind of meal. My son was not a turkey fan. He had it in elementary school for their Thanksgiving Feast on the Wednesday before the holiday. But as he’s gotten older and experienced more foods he’s grown to like it. He gets mostly turkey sandwiches for lunch (made by my husband), but occasionally he and my husband will order it when they dine out.

I didn’t have problems with poultry until I was in my teens, so I do miss it. (Even though the scent of it can make it difficult to breath.) With Thanksgiving just around the corner, I’ve been thinking more and more about it. Especially since it’s free turkey time at my ShopRite (that is if you spend enough money…I have NO problem doing that). There are alternatives to the free turkey: a ham, a frozen lasagna OR a Tofurky.

I always go for the free ham. But the advertised Tofurky was tempting me. I thought I’d get one…and PAY for it! But when I went searching in my regular ShopRite, it was nowhere to be found. I did some more digging and I found ONE battered box in the back of the frozen turkeys. It was so beaten up, that just by touching it, the box opened and the contents started to fall out. Umm…That would be a pass for me.

Yet still the Tofurky stayed on my mind. You might say it started to become an obsession. I HAD to try it. I HAD to make my little family of three a faux turkey dinner! This ruminated in my mind for several days…as I dug out from the snow, I was plotting to find a Tofurky. Drinking my coffee on Saturday morning, Tofurky was on my mind. I HAD to do this.

So shortly before 9 on Saturday morning, I headed out, this time to a different ShopRite. (I figured ShopRite was still my best bet since they were advertising it as part of their free holiday offering.) I’d say this one is larger and a bit more diverse, so I had high hopes.

The problem with finding a Tofurky is figuring out where they put it. It is a frozen item, but it is NOT in the frozen aisle. Not even in the frozen vegan section. It is generally placed in amongst the turkeys, but finding it is like looking for a needle in a haystack. Luckily in this ShopRite there was more than one needle…In among the throngs of frozen turkeys, there was a small stack of boxes that were marked with the Tofurky name. Digging one out, as they were packed in like…well like sardines (not a good analogy, I know). A gal could break a finger (or at least a fingernail) trying to pry out one of the boxes. And they are flimsy boxes at that! (Do you hear that Tofurky people?) They started opening and falling apart as I tried to grab one. But I DID do it.

Once at home, I had to figure out exactly what I was supposed to do with the sucker. According to the directions you are supposed to thaw for 24 hours in the refrigerator. But I wanted it for dinner that night. No problem, it DOES have cooking instructions if it is NOT thawed. Opening the box, which contained the Tofurky, gravy and non-dairy cheesecake (I know…I know!), I decided to leave it out so that it was thaw somewhat. (Except for the “cheesecake” which stayed in the fridge.)

I also wasn’t sure what to do/how to “baste”. The box suggested a couple of things, so I decided to use vegetable broth, with a little garlic and white wine. My husband and I had a “debate” as to whether I actually had a baster. Why would I? I don’t do turkey. He insisted we did. Per usual, he was right. (And it was still in the package in the back of a cabinet. Now I can proudly say that I have basted AND brushed a Tofurky!)

So around 3 on Saturday afternoon, I got down the roasting pan, pre-heated my oven to 350 and had my husband line the pan with foil and cut open the Tofurky wrapping. The Tofurky was semi-defrosted and looked like a giant potato. I did my best to baste and threw it in the oven. The adventure had truly begun!

Went back an hour or so later…looked pretty much the same, but there was no liquid to baste. So I added a little more and went about my business.

So a quick hop in the car to the local (overpriced) grocery store and a can of cranberry sauce (with no whole berries…which I what I THOUGHT I picked up, but found that I didn’t when I opened the can and it lumped out. (And not well…I am not skilled enough to get one giant cranberry can shape. Shame on me.) Then it was on to heating the lumpy gravy (which did get less lumpy and it was heated and stirred and stirred and stirred). I poured the rest of the broth over the giant baked potato-looking Tofurky as I finished cooking it uncovered for the last 15 minutes.

Finally it was time to take the darned thing out of the oven. Sitting there on a plate it didn’t look to great, but…then I tried to cut into it. And I kept trying to cut into it. The “skin” of the Tofurky was really hard to cut through. Ok, it was impossible to cut through. The lovely slices with stuffing inside of them (as illustrated on the box) were NOT happening. 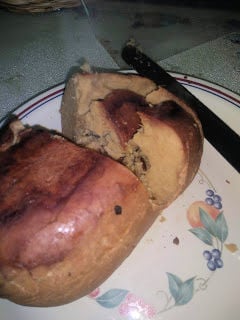 I gave up and tried to saw the thing in half:

Doesn’t look very appetizing does it? Well it only got worse as I tried to create slices and stuffing was falling out and making a mess everywhere. The whole idea of slices was just not working. So I started cutting HUNKS. Meanwhile the stuffing is all over the place and not in a good way.

Somehow I managed. I figured a couple of hunks, some stuffing and gravy poured all over it, it would work? Add a little cranberry sauce and it was all good. Right??

Not great looking, but…It actually tasted pretty good. My guys went back for 2nd “hunks.” So it wasn’t a total flop or disaster like I had feared, but…

When I went to clean up the pan, I found out where all the “baste” had gone. While there were no rips in the aluminum foil, somehow all of the liquid had gotten UNDERNEATH the foil and made a nice mess. (This Thanksgiving, and EVERY Thanksgiving I am thankful for a husband who will clean up after I cook a messy meal. Not that I left him completely on his own, but he did tackle the pan.) 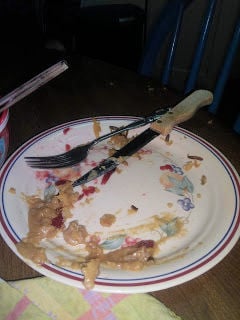 So what is the takeaway here?

Happy Thanksgiving to All!