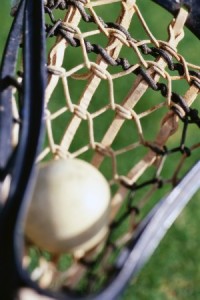 The Verona High School girls lacrosse team put together their most complete game of the season in a 13-9 Freedom Conference road win over Kent Place School in Summit on Saturday, with seven different players recording points and four players scoring two or more goals each, combined with strong defense and goaltending play.

Senior Ashley Nigro put Verona ahead 1-0 with her lone goal of the game a few minutes into the contest with a strong crease roll from behind the net. Kent Place responded with an equalizer almost immediately only to see senior captain CC Courter take the ensuing draw directly to goal and find the back of the net, the first of her two goals on the game, pushing Verona’s lead to 2-1. Kent Place would once again tie the game at 2-2, before Verona junior Emily Coppola made a momentum-changing play, harassing the Kent Place goalie behind the net on a clearing attempt, forcing her to lose the ball. Coppola quickly pounced on the opportunity and fired to a streaking sophomore Maggie Lonsinger in front of the net for a pivotal goal. It launched the Lady Hillbillies on a run that saw them record the next four goals of the game, stretching their lead to 7-2 in the first half with another goal from Courter, a second from Lonsinger and two from the suddenly red-hot Coppola with assists from Lonsinger and Courter.

Kent Place though, would not go quietly and conducted a scoring run of their own, with four goals in the last few minutes before halftime to make the score 7-6 going into the break.

After several minutes into the second half, Kent Place registered the equalizer, knotting things up at 7-7. Verona fought hard for the next draw control, which led to the go-ahead goal from junior Allie Madigan, who put forth a spirited effort with two goals and three draw controls on the game, nudging Verona to an 8-7 lead. Coppola would net her third goal of the game a few minutes later, ripping a frozen rope past the Kent Place goalkeeper to make it 9-7 Verona.

With thirteen minutes left in the second half, Verona goalie Skyler Freedman, who played great in the net all day for the Hillbillies, made one of her game-high 13 saves, then launched a clearing pass to midfielder Courter who navigated the length of the field and drew two defenders near the Kent Place goal before lofting a pass to a wide-open senior, Jenna Staranka. She finished the play with a well-placed shot to the top, far corner of the net, pushing the Verona lead to 10-7 with her first goal of the season.

Lonsinger would record the next two goals for Verona, giving her a game-high four tallies for the day, to push Verona’s advantage to 12-7 with under 10 minutes to play. Kent Place had one more burst in them, scoring the next two goals before Verona’s Freedman halted their run with a fabulous stick save on a direct eight-meter attempt with 2:40 left in the game. Verona would hold possession to whittle the clock down to under a minute, but Kent Place got it back one last time and threatened before defender Lara Tole, who was stellar all game, stepped in and intercepted a pass to close the door on Kent Place’s hopes for a comeback. Junior midfielder Allie Madigan, after taking a questionable shot from the opposing side that seemed to knock the wind out of her, was awarded an eight-meter shot attempt and fittingly scored her second goal of the game to make the final score 13-9 for Verona.

The impressive road win improves the Lady Hillbillies to a 3-1 overall record and 2-0 in league play. The girls will play their home opener on Tuesday, April 10, against Morris Knolls at 4:30 p.m.