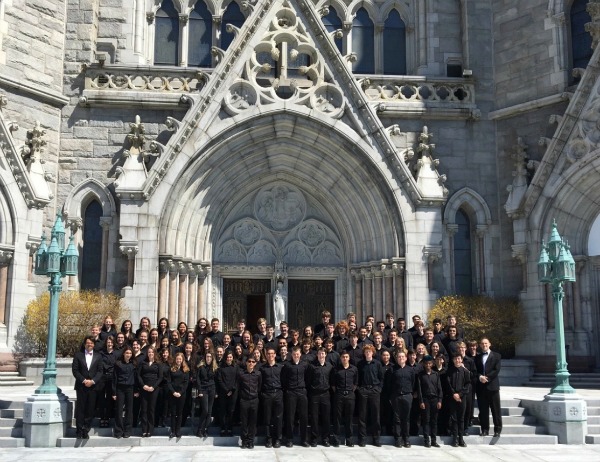 Parents, friends and music lovers are invited to two exciting, upcoming April performances by Verona High School’s student musicians. The first is the Verona Concert Band performance at the magnificent Cathedral Basilica of the Sacred Heart in Newark on Wednesday, April 18, as part of the Cathedral’s “Wednesdays at Noon” program.

The April 18 performance marks the third time the Verona Concert Band has performed at the Cathedral Basilica. In 2012, the Verona Concert Band became the first non-professional band to perform in the Cathedral Basilica music series. In 2016 (pictured above), the band returned to the Basilica to perform the world premier of David Gillingham’s “Organic Matters for Solo Organ and Band” with famed organist Vincent Carr of Indiana University.

Verona High School is proud return to the Cathedral Basilica this again in a performance that will feature the works of Gabrieli, Fillmore, Ginastera, and Cichy. The noon performance is free of charge and is open to the public. The Concert Band is directed by Erik Lynch.

The second April musical event is Verona Jazz and Beyond’s spring concert on Thursday, April 26, at 7:30 p.m. at Verona High School. The performance will span a wide range of music, including a tribute to one of jazz music’s most distinguished musicians, Dizzy Gillespie. Music of other jazz greats will include John Coltrane and Red Bank, N.J. native Count Basie, as well as the contemporary Brooklyn band Snarky Puppy and rock band Chicago.

Verona Jazz and Beyond will also cover the genre of popular music with the hits “My Music” by Loggins and Messina, “Sweet Soul Music” by Arthur Conley and “I’ve Got the Music In Me” by Kiki Dee. To honor musicians who we have lost in the last year, they will also perform music by Steely Dan (Walter Becker) and the Traveling Willburys (Tom Petty) and others.

Verona Jazz and Beyond is a select ensemble chosen by audition; the director is Max Morden. The concert is free of charge. Verona High School is located at 151 Fairview Ave.