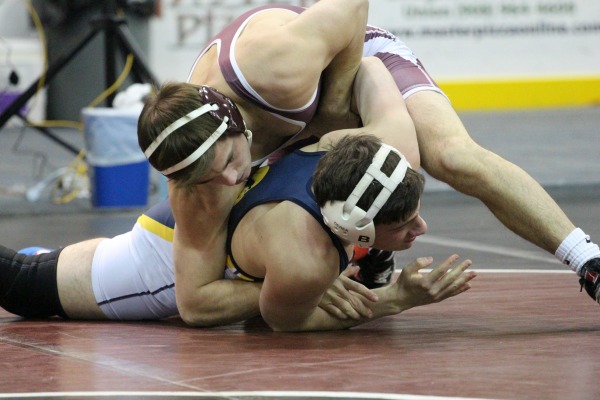 There were no bells and whistles going off at wrestling’s Essex County Tournament last night. No confetti guns. No cannons. But something definitely was being blasted: Verona High School’s record for the most career wrestling wins.

When Frank Gabriele quickly pinned his Belleville opponent, the VHS senior recorded his 124th win, breaking the record set by Colin Farawell in 2011 at 123 wins. And Verona’s varsity wrestling season is barely at the halfway point.

Gabriele has long been a leader in Verona wrestling. Unlike those who had preceded him–Farawell, Dillon Lawler, Chris Hardenberg, Frank Greco and Paul Scully–Gabriele scored his 100th win in his junior year.

But there are no hard feelings from Farawell. “Congratulations to Frank on breaking the VHS career win record,” he said last night. “Incredibly impressive feat and very well deserved. I look forward to watching his continued success into this post season.”

Gabriele who also got a pin in the ECT quarterfinals, faces Blake McGowan of Columbia tonight in the semifinals. That could contribute to the one final VHS wrestling record that remains to be broken: 40 wins in a single season, a record also held by Farawell.