Farawell To Wrestle For Bucknell 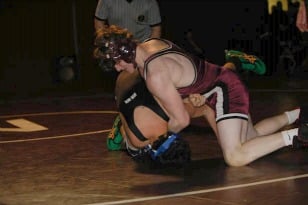 Colin Farawell, who set records for Verona High School in both wrestling and lacrosse, has committed to attending Bucknell University in the fall as part of its wrestling program.

Farawell is the Hillbillies all-time wrestling victory leader with 123 wins and the only VHS wrestler ever to amass 40 wins in a single season. He was the first VHS player to go over 200 career points in lacrosse, and the first to make the all-state team. He also played football for VHS and as a sophomore kicked the go-ahead point at Giants Stadium that sealed the Hillbillies state championship. A graduate of the class of 2011, Farawell is spending the current school year at The Hill School in Pottstown, Pa. He has been wrestling for its team and is 11-0 on the season.

But Farawell’s dad said it was difficult for his son to choose between the two sports that he loves. “It was a tough decision between lacrosse and wrestling,” he said. ”It came down to the right school and Bucknell was the best choice.”

Bucknell sounds pleased with the decision too. “I am really excited about the group of guys that we have coming in next year,” said Bucknell head wrestling coach Dan Wirnsberger, in a statement release by the college. “When we recruit student-athletes, we try to find guys that are like-minded and that wrestle our style, which is physical, aggressive, and unrelenting. When I look back at years’ past, I think that we have had some talented classes, but this class is the toughest and grittiest that we’ve ever brought in and I anticipate that translating well to the type of schedule that we wrestle. This group has a chance to make an immediate and significant impact, not only within our program and conference, but nationally as well.”

- Advertisement -
Previous articleFriday Poll: Pajamas In School Or Not?
Next articleTCNJ Names 6 To Dean’s List