It seemed like every high school runner in northern New Jersey was in Mahwah’s Darlington Park for the Brett Taylor Invitational on Saturday morning, and when the dust settled on the 5,000 meter distance, it was another strong outing for the Verona High School cross country teams.

Both the Verona boys and girls squads had a successful dual-meet start to the cross country season. Team members ran a lot over the summer and the increased mileage they put on has been a big factor in their results so far. (Read DiGeronimo’s story about the training here.) The boys team finished 6-1 in its Super Essex Conference dual meets, and placed second in the SEC Liberty Championship Meet behind Livingston, a group 4 school.

For the boys coach, Laura Palmerezzi, two meets stand out as key races so far. The first was at Greystone Park in Morris County, which was a new course for Verona. Many of the boys ran personal bests, with Navarro, Robinson and Jason Siegelin all breaking 19 minutes. Those finishes could be key later this fall because the state Sectionals will be held at Greystone in November.

Last Tuesday, at the SEC Championship Meet, the boys ran more personal bests, to take second place. Navarro, a sophomore, took 8th and medaled, leading the team with a 18:32 finish. Both Robinson and Jason Siegelin broke 19 minutes again and both finished in the top 15.

“The XC boys are very dedicated to running and extremely hard workers,” says Palmerezzi. “I’m so proud of this team this fall.” 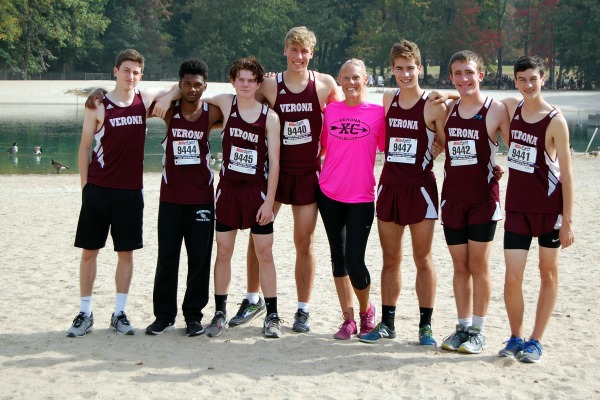