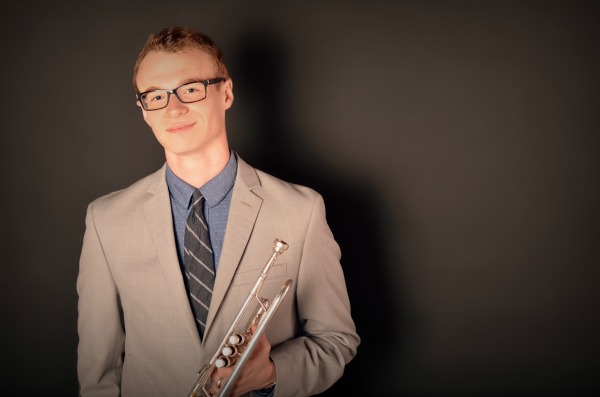 You’ll have to forgive the stars in Dan Egan’s eyes. Not every young musician gets to perform at two world-renowned venues within a year. Egan, a trumpeter who graduated Verona High School with the class of 2010, appeared at Carnegie Hall in October with the orchestra from Rice University, where he is now completing a master’s degree. Then in December, Egan was notified that he had been chosen to participate in the New York Philharmonic’s Global Academy Fellowship Program this April.

“Everyone I know at Rice and at VHS know that I worship the Philharmonic,” he says.

It is just a little over 20 miles from Verona to the famed orchestra’s home at Lincoln Center for the Performing Arts, almost a straight shot east. But Egan’s journey there has taken him from Verona in loops from Manhattan to the midwest to Texas and beyond.

Egan started playing trumpet like most Verona school musicians, in the fourth grade under Max Morden. He studied privately under fellow Verona resident Lynn Tucci–“She set me up really well,” Egan says–before attending the Juilliard School’s Pre-College Division during his junior and senior years at VHS. “I was still a full-time member of the VHS band,” says Egan, “so I would come back from the city and ship off to marching band competitions.”

He received his bachelor’s degree at Indiana University and then was selected for Rice University’s Shepherd School of Music for his master’s. Egan was named a fellow at the National Repertory Orchestra in Breckenridge, Colo. in 2013 and has taught at the Luzerne Music Center in upstate New York, where he also played in the faculty brass quintet.

“I knew fairly early on that I wanted to do this professionally,” Egan says simply.

“This” is classical concert music, even though Egan played jazz at VHS and in college. “When I think about my own musical education it was a way of differentiating myself,” he says. “Jazz is much more a centerpiece in American culture than classical music.”

Egan’s studies–in Verona and since his graduation from VHS–seem to have positioned him well for success. “Dan took every part of our music,” says Verona High School music teacher Erik Lynch. “He extracted everything from our programs that he could. Dan is inquisitive and reflective by nature,” he adds. “He would come down at the end of the school day and play for Max and I.”

Rice’s Shepherd School of Music, meanwhile, is one of just two partners of the Philharmonic’s Global Academy Fellowship Program. Egan had to audition for his spot last fall, however, and was the only Shepherd School brass player chosen to perform. He and the five other Shepherd School winners will travel to New York in late April to train and play alongside Philharmonic musicians under Esa-Pekka Salonen, its composer-in-residence. There will be lessons and chamber music sessions and, perhaps most importantly for the next step in his career, mock auditions. The program will culminate in performances of Beethoven’s Leonore Overture No. 2 and Strauss’ Also sprach Zarathustra with Philharmonic musicians on Thursday, April 27, and Saturday, April 29.

How good can a Verona music education sound? Egan sent us snippets of some of his audition pieces: The first excerpt is from Arthur Honegger’s Intrada for Trumpet and Piano;


The second is a famous trumpet solo from Igor Stravinsky’s Petrushka;

And the third is a famous trumpet solo from Aaron Copland’s Outdoor Overture.

Egan’s goal now is a full-time playing job in a regional orchestra and then a major orchestra. He has several auditions coming up in the spring, but acknowledges that it’s a very competitive process. There are only a little more than 100 orchestras with million-dollar budgets, and even they can struggle to keep their funding in equilibrium. Small orchestras outside America’s major cities generally don’t employ their musicians year-round. “It’s tough,” concedes Lynch, “but not many people make it as far as Dan has already.”

Egan accepts the compliment humbly. “I need to say thank you to Verona,” he says. “The way that I was exposed to this great music was not at a conservatory, it was not at a museum. It was at my high school.”