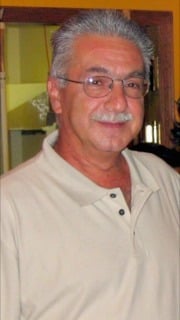 A funeral mass will be offered on Friday, September 9, 2016 at 10 a.m. at Our Lady of the Lake Church, Verona, with interment to follow at Gate of Heaven Cemetery in East Hanover. Condolences and memories may be shared at farmerfuneral.com.

Frank was a lifelong resident of Verona. During the Vietnam War, he served in the U.S. Army. For over 30 years, he worked as a printer for Par Code Symbologyin Roseland. In his spare time, he enjoyed woodworking, carpentry and spending time with his family.

He was predeceased by his parents Frank A. and Catherine Palmer and his beloved puppy, Emmitt XO. Frank is survived by his beloved wife of 43 years, Rosemary (Ciaramello) Palmer; devoted children, Frank A. Palmer III, Celeste Palmer and Anthony Palmer and his wife Shannon; cherished grandchildren, Dean, Dante, Danika and Bianca and his loving siblings, Anna DeCapua, Lena Homeland, Irma Schelhorn and Elaine Palmer.

In lieu of flowers, donations may be made in his memory to the Verona Rescue Squad or the Verona 5th Downers Booster Club.