Facebook
Twitter
Pinterest
WhatsApp
- Advertisement -
The Verona-Glen Ridge hockey team fired all the afterburners in the second period of tonight’s state playoff against Woodbridge and turned a 4-1 deficit into a 7-4 VGR victory.

The game was the first round of the Public B playoffs and VGR, the #13 seed, came into riding high after its Saturday night McInnis Cup victory over Montclair Kimberley Academy. The combo team got on the scoreboard first with a goal by Jarrod Keating, a freshman from its Verona side. Woodbridge tied the game and proceeded to play as if it were much better than its 20th-seeded spot would indicate. In the second period, as VGR limped through two penalties, Woodbridge piled up three more goals, making it 4-1 at the 8:20 mark.

And then it started. Owen Gleeson, a senior from the Glen Ridge side of the team who had been so decisive in the McInnis Cup play, brought the score to 4-2. Steven Topping, a Glen Ridge junior, closed the deficit to 4-3. Glen Ridge freshman Jake Kuhn tied it and as the second period ticked down to a close, Stephen Wenzel put VGR ahead with a 5-4.


There was no let-down in the momentum in the third period. Gleeson scored again (he had assists in every score of the night) and then Kevin White, a Verona senior, made it six unanswered goals and melted any hope that this would be Woodridge’s night.
- Advertisement -

What happens in round two depends on the outcome of Tuesday night’s game between #4 Ramsey and #29 Jefferson. VGR will play the winner on Friday, February 26. 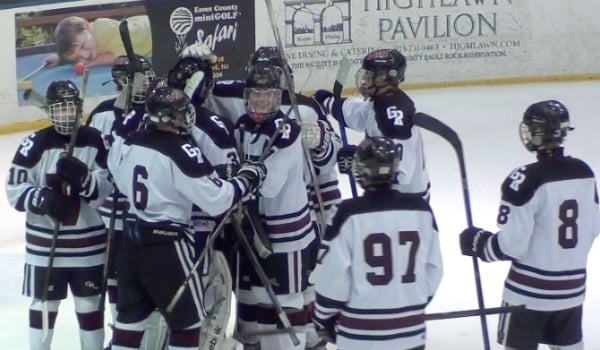