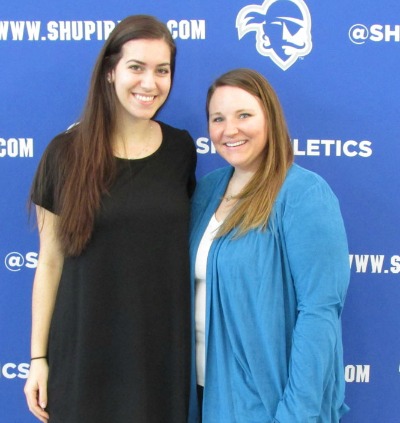 The New Jersey area joined the nation in celebrating the many achievements of girls and women in sport. The state‐wide celebration for National Girls and Women in Sport Day at Seton Hall University included an awards luncheon, where outstanding high school, college, and university female athletes were presented with special awards from the National Association for Girls and Women in Sport. All NJSIAA (New Jersey State Interscholastic Athletic Association) member schools were eligible to nominate a deserving female student athlete for the outstanding distinction.

The event was followed with complimentary tickets to the Seton Hall University Women’s Basketball Game versus St. John’s University. This year’s theme, “Leading the Way” marked the 30th anniversary of the celebration.

Mount Saint Dominic Academy, established by the Sisters of St. Dominic in Caldwell, New Jersey, is a Catholic college preparatory school, dedicated to the education of young women from a variety of ethnic, religious and economic backgrounds. Since 1892, The Mount has been empowering young women in the Dominican tradition. For more information about Mount Saint Dominic Academy,visit www.msdacademy.org.