The Referendum, One Year On

Facebook
Twitter
Pinterest
WhatsApp
Today, March 11, is the one-year anniversary of the referendum that Verona voters overwhelmingly approved to make improvements to Verona’s public schools, inside and out. Work on the referendum, which totaled $13.8 million after state aid secured by the Board of Education, started within hours of the ballots being counted, and several aspects of the project have already been completed. But one key component, the turfing of the lower field, has been held up by opponents to the referendum and, we might as well say it from the get-go, the field will not be ready for this September. And yes, the delay is going to cost a lot of money.

Good news first. The wireless network has been installed across the district, which made it possible to already start using the 460 Chromebooks the district bought from its regular operating budget. The Board of Education’s plan is to add to its Chromebook inventory every year and several SCAs are planning to put some of their funds toward the computers, which are being used for the PARCC but, more importantly, for a wide range of new educational programs in classrooms. The new district phone system is complete and the in-classroom phone and intercom system at Verona High School is also done. By the end of March, the security cameras will have been installed in all locations except where new construction is needed, like the vestibule that will be added to the front of Verona High School to improve school security. 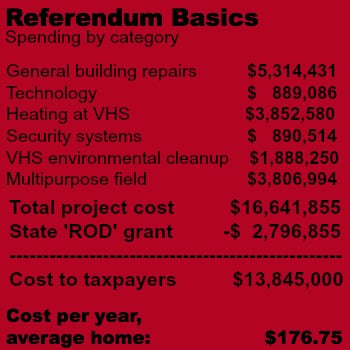 Next up are the exterior doors and the emergency generator. According to Superintendent Rui Dionisio, the winning bid for the doors came in well below budget. They are being made now and some of the installation will begin in late May. Dionisio says that all of the doors will be installed by late August. The winning bid for the generator, which is being installed at VHS, was slightly above budget but Dionisio says that contingency funds will cover that. The generator project will be finished before the school year starts.

On Tuesday of this week, bidding opened on several projects: the fire system upgrades at F.N. Brown and Forest Avenue elementary schools; the driveway paving and sidewalks at VHS, HBW, Forest and Brown; and the bleacher upgrades at VHS and Brookdale Avenue school. The new heating system at the high school will go out to bid at the end of this month and bids for the new vestibule at VHS, the music room expansion and masonry repairs at Brookdale will be let in April.

When the school year is over in June, Verona High School will be completely shut to the public to begin the construction and heating system work. The old boiler, which dates from 1956, must be removed and the asbestos in the system as well. The summer music and theater program that usually takes place at VHS will be moved to H.B. Whitehorne. The access control system will be put into place at VHS and all the schools over the summer.

And now for the bad news, the field at VHS. After the referendum passed by a vote of 1,777 to 1,067 last March, a handful of residents on streets abutting the high school began working to derail the field project, which involves turfing Doc Goeltz Field for use by several sports and the marching band. The so-called Be A Good Neighbor Group hired a lawyer, who went before the Verona Planning Board last November and asserted that the field needed a full-blown site plan and not a so-called courtesy review because it did not meet the state definition of a school facility. Greg Mascera, the Planning Board’s attorney, sided with the opponents and told the body several times during the hearing that Verona would not issue building permits to any plan that had not had a full site plan review. At the same meeting, however, the Planning Board approved the referendum’s addition to the Verona High School music room without \ a full site plan review or opposition from Mascera.

The Planning Board’s decision on the field was submitted to the state Department of Education and the Board of Education has been waiting since November for its opinion. The department recently told the BOE that the project has its blessing, but must follow town code, which means that the BOE has had to commission a full site plan for the field work, to be reviewed by review by either the Planning Board or the Board of Adjustment. (UPDATE: The reconstruction and expansion of the VHS tennis courts and parking lot will also be delayed until 2016.)

That site plan will eat up $55,000 of the referendum’s budget and, with the calendars of both boards crowded with other projects, Dionisio now expects that bids on the field work will not be let until January 2016. It is not yet known what other referendum work will be compromised by the extra expense; the BOE will also have to pay from its regular budget for bleacher rentals on the lower field this fall. Barbara Bochese, who was one of the creators of Be A Good Neighbor, is no longer a Verona resident and the registration for the group’s Web site has lapsed.

The delay rankles Carlo Calabrese, who worked hard to get the referendum passed last year. “I am still appalled by taxpayers who attempt to stop our commitment,” he said this week. “The majority of the voters of our great town want the best for our community. I am embarrassed by the conditions our children, student athletes, educators and administrators must face as our neighbors continue to improve their facilities.” In December, Cedar Grove approved a turfed multipurpose field as part of a $14.8 million referendum, while Caldwell voted to turf Bonnel Field under an $18.2 million referendum.