Facebook
Twitter
Pinterest
WhatsApp
- Advertisement -
They were called the Summer Olympics, but in 1964, the international sporting event was held from October 10 to 24. And on October 13, a very tall–very tall–young man from Verona smashed the world record in the 200-meter backstroke and came away with a gold medal.

Today is the 50th anniversary of that moment, and we’d like to take a moment now to remember Jed Graef, for his record and his legacy: Graef’s then record-shattering time of 2:10.3 is the reason why Verona built an Olympic size pool.

As we noted in 2011, when we wrote about a family that had discovered “Jed Graef Day” memorabilia in its attic, Graef never swam in the pool he inspired (he trained in Lake Mohawk), and he had no idea that, every summer, dozens of Verona kids use the pool as the fast lane to their own Olympic dreams. (West Orange also had a gold medal winner in the 1964 Olympics and named its town pool the Ginny Duenkel Pool in her honor.)

So take a minute today to watch the race and the medals ceremony at the end of this news reel by clicking on the “right click to save” link in the red box. You can read our original story on Jed Graef here. 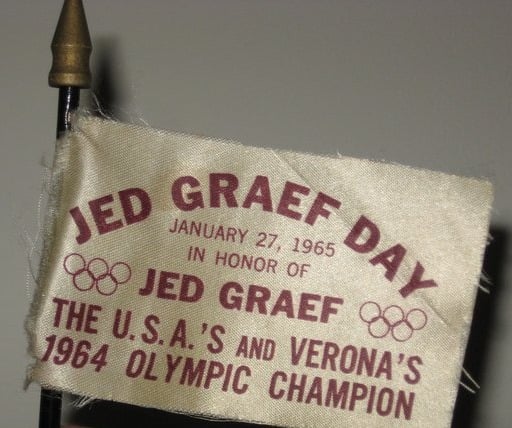