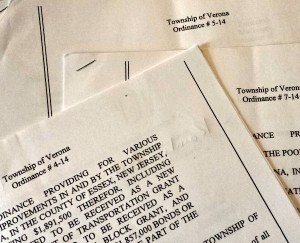 Monday night’s Town Council meeting turned into a tense test of wills as Council members took issue with two proposed bond issues and the process that led to the hiring of a new town clerk. Private session discussions spilled over into public view as it was disclosed that the Verona PBA has retained a lawyer over IT issues in the Verona Police Department.

There were four bond ordinances up for a vote on Monday: a $33,000 measure for pool repairs, $143,000 for new water meters, $1.255 million for repairs to the sewer treatment plant and a $1.857 million bond to fund a broad array of projects from street reconstruction to repairs to the cell phone tower. The first two passed easily, but the latter revived old divisions on the Council about bonding for equipment with a short life expectancy.

But before Council members could get to the bond issues, tempers flared when Councilman Michael Nochimson mentioned the PBA letter. “I am told that the PBA sent a letter to the township and that the gravity of the letter discussed perverse behavior that is shocking but consistent with my personal experiences with the IT department,” Nochimson said. “When those at the top permit this behavior to knowingly occur they are also accountable and should be removed.” Nochimson, who was cautioned by town attorney Michael Gannaio and Mayor Bob Manley that the letter was a matter for private session, has raised issues about problems with the information technology department in the past and last November called for all of Verona’s tech services to be managed by the Police Department.

The specifics of the letter have not been made public. On Tuesday, Anthony Condorelli, vice president of Verona PBA Local 72, issued the following statement about it:

The Local has serious concerns about the way information technology, related systems, equipment and policies as they relate to information technology, are administered throughout the police department. We have tried to resolve these issues with upper management without success. Therefore, the Local has retained legal counsel to address our concerns. At this time our attorney and the town attorney are working together and we are optimistic that the issues will be resolved in the near future. We are confident that resolving these issues will provide a safer atmosphere for our officers and a more efficient police department for the residents of Verona.

Town Manager Joe Martin, who has consistently sought to portray relations with the Police Department as cordial, acknowledged receipt of a letter from the PBA’s attorney. “We have reviewed the letter internally and have come up with a list of short-term improvements,” Martin said on Wednesday. He added that he will meet with PBA’s attorney next week and would report on the changes to be made at the Council’s August meeting. Martin said that no town employees have been issued a so-called Rice notice, which is required if matters concerning the employee are to be discussed in public. “The PBA’s observations are for the most part very reasonable,” said Martin. “We will make changes as we have in the past and will continue to do so in the future.” The Council’s next meeting is Monday, August 11. Nochimson said Thursday that he is completely committed to the PBA’s efforts. 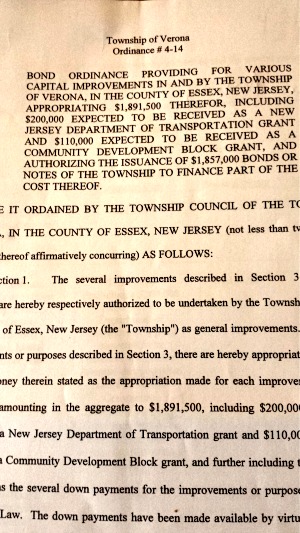 The Council, which has repeatedly split over financial issues since the election of Nochimson and Kevin Ryan, divided again over ordinance 4-14, which sought $1,857,000 in bonds. The bulk of that–$1.17 million–was to cover repairs to Linden Avenue from Fairview to Grove and several smaller streets. But the ordinance also included $400,000 for a largely unspecified number of vehicles, $114,250 to repair the cell tower building behind the Community Center and $66,500 for thermal imaging equipment for the Fire Department, as well as $42,750 for flooring, communications and HVAC equipment at the VCC.

Ryan, who noted that Verona’s debt service has risen 10% in the past year, asked whether Martin had gone back to previously approved ordinances to see if there were funds still available in some of them for the new request, particularly the vehicles. He noted that during his time on the Council, it had approved several requests for vehicle funding but had never been told whether they had, in fact, been purchased. Ryan noted that he had attempted to go back through previous ordinances for information but was stymied because Verona does not post new laws to its Web site, even though it has been recommended to do so by the state. Montclair and many neighboring towns already post their laws this way.

Ryan and Nochimson voted against ordinance 4-14, leaving it one vote short of the four needed to pass. Councilman Jay Sniatkowski, who criticized Ryan and Nochimson during the discussion for what he said was a lack of knowledge of municipal finance, angrily asked them after the vote how they would explain its defeat to the residents of the affected streets, adding “hopefully they can get something next year”. In fact, a new ordinance covering the work could be introduced as soon as the next meeting and Verona might not lose the $310,000 in grant money it had won for the road work.

After the meeting, Ryan reiterated his objection for using long-term borrowing to fund short-lived spending. “I don’t like bond ordinances that are padded with things that should we be looking to pay for out of the regular operating budget,” he said. “A five-year life expectancy is the minimum standard for budget. We have enough flexibility in the budget that they should be able to find the money to pay for these things. I have expressed this in the past, they shouldn’t have been surprised.” Last September, Ryan and Nochimson voted against a bond for a new 911 emergency system to be shared with Cedar Grove because the borrowings would also have been used to pay for computers. Martin cut roughly $50,000 in spending from that measure and it was approved by the Council in January. The system has yet to be installed, though Martin said that had nothing to do with the PBA’s letter about the IT department.

Ordinance 5-14 also drew sharp words because Nochimson attempted to tie his approval of the measure to a pledge by Tim Newton, who runs the town’s sewer and water operations, to cut what the councilman characterized as planned overtime. The ordinance sought $1,255,000 to replace both of the filters at the sewage treatment plant, one of which is now offline because it has been cannibalized to provide parts for the second. It would also fund a new standby generator, lab equipment, roof repairs and a fence to fully enclose the treatment plant. That is something that was mandated by the federal department of Homeland Security after the 9-11 attacks but never implemented in Verona. To win Council votes, Martin agreed to hold off on everything but the filter replacement–$950,000–without further approval. The measure passed.

On Wednesday, Ryan said he had recently taken a two-hour tour of the sewage plant with Newton. “I asked specifically whether there were any health and safety issues with the tricolor [filter] and was told no, because it is only one part of the treatment systems,” Ryan said. “While it needs to be fixed, the town is not at risk.”

The final matter of the night was a resolution approving Jennifer F. Kiernan, a current town employee, as the new municipal clerk. Nochimson and Ryan both expressed confidence that Kiernan could do the job, but abstained from voting over what Ryan called “the process that has gotten us to this point.” Personnel matters are handled in closed session so it is not known what was at issue with the hiring process. Kiernan starts her three-year term on August 1. Sue Neale had been acting municipal clerk since the death of Jean McEnroe in 2011.

Residents looking to watch the two-hour meeting can set their DVRs according to the schedule here; unlike the Board of Education, the town government does not post its meetings to YouTube.

CORRECTION: Sue Neale has been the acting municipal clerk since the death of Jean McEnroe in 2011.