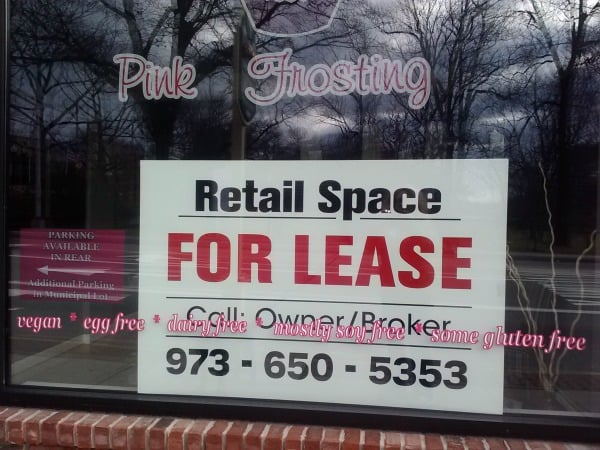 Pink Frosting bakery has closed. A “we are closed” sign went up on the front door over the holiday break, but it was unclear whether it was a vacation break or something more. But the “For Lease” placard that went up this week confirms the worst fears of some former Pink Frosting customers.

Located across the street from Verona Park, the bakery was unique in Verona in that it carried several varieties of vegan cupcakes, which was helpful for people with food allergies. Beth Shorten, who has severe egg allergies wrote on her blog this week about what the bakery brought to her life:

Last June, for the first time in my life, I had a “real” birthday cake. Don’t get me wrong, my mother tried to make my cakes, but with my egg allergies, they just didn’t work out. I had plenty of other birthday treats, but an actual cake was something that didn’t pan out. (Even when I tried to make a cake myself with egg replacer, it just didn’t cut the mustard).

Then last year my husband bought me a cake from a relatively new vegan bakery in town. It was delicious and I was so thrilled about it that I devoted a blog post to it.

My husband took photos. He said it was like looking at a child on Christmas morning. It was a delicious, if fattening, celebration.

Pink Frosting originally opened as Cupcraze in October 2012. There was a nationally famous bakery with a very similar name and logo, and Verona’s bakery later changed its name to Pink Frosting.

We don’t know why Pink Frosting closed. MyVeronaNJ.com left phone and email messages for former owner Hiral Udawat, but they were not returned. So we’ll share Shorten’s goodbyes:

I’d like to thank Pink Frosting for the year that they gave me. For providing me with a birthday cake. For introducing me to Red Velvet cupcakes. For all the delicious cupcakes that I had the pleasure of trying. It was wonderful.

But it wasn’t JUST about the food (although that was a BIG part of it). Everyone there was so kind and helpful. Service like that is rare…and will be even rarer now that Pink Frosting is no more.

I don’t know why they closed, but I do know it wasn’t because of excellent baked goods or even better service.