Get Local Lightning Warnings On Your Phone 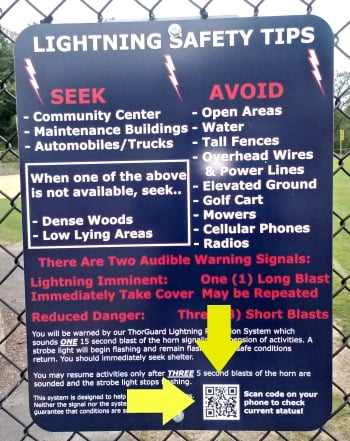 Since the summer of 2011, Verona has had a lightning warning system at the Verona Pool and the Linn Drive and Centennial fields at the Verona Community Center. It is designed to sense a lightning strike well before it can be spotted by people in the water or on the playing fields, and then set off sound and flashing light alarms.

But because the Thor Guard system warning can come as much as 8 to 20 minutes in advance of lightning there has apparently been some skepticism about whether a severe storm is really on the way.

Wonder no more: The town has added a so-called QR code to the lightning alert signs by the fields and the pool. (See the black and white image in the lower right of the sign.) Scan it with your smartphone and you’ll know all you need to know about how the impending storm will affect where you are.

To use the QR code, you’ll need to open the QR code reader on your phone. If you don’t have one already, most are free downloads from your cell phone carrier or Google Play. Take a picture of the code and the information about lightning activity will pop up on your screen.