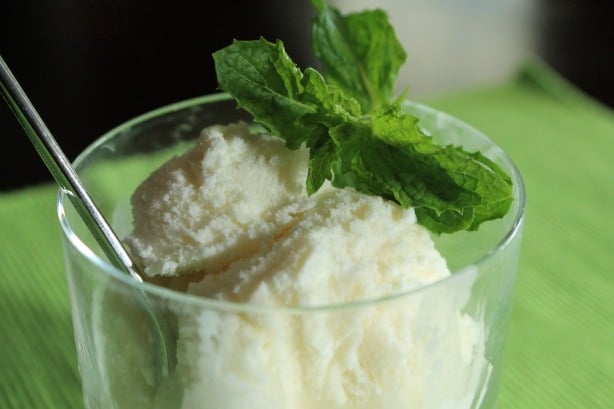 Originally, this started as a Lime Vanilla ice cream. There is no question that vanilla and lime go well together, it’s just a matter of finding the right balance. I had made some Lime Vanilla this past spring and the best part was that when I put some of the ice cream in a little graham cracker pie shell and then added some whipped cream on top, I suddenly had my own version of a little key lime ice cream pie. Very tasty.

However, I hit the Roseland farmer’s market last Friday afternoon and saw mint. Then I thought: lime+vanilla+mint=mojito. These flavors all go well  together and combining them in an ice cream would be fun. For those of you who have a ton of mint growing, it’s a great way to use some of it up. Right now, I’m regretting having pulled all of mine up last fall.

My goal in creating this PG-13 version of a mojito and adapting it for ice cream was to not create another peppermint ice cream. I definitely wanted the tartness of the lime to contrast with the vanilla of the ice cream and pull it all together with some mint, but not too much. I also didn’t want to be eating mint leaves in my ice cream. A little zest I can handle, but the mint leaves, no thanks. What I learned is that using mint leaves gives a very different mint taste from the mint extract used for making mint chocolate chip. In the case of this recipe, it was a good thing. My biggest challenge is that I have not had an actual mojito in probably about 12 years, so while I think this little experiment worked pretty well, if any of you have had one recently and want to stop by for a taste and tell me how the ice cream is, that would be just fine with me.

juice from one lime

Place sugar, water, mint juice, and zest from one lime in a medium sized pan. Bring contents to a boil. Turn off heat and let sit for 10 minutes for flavors to meld. 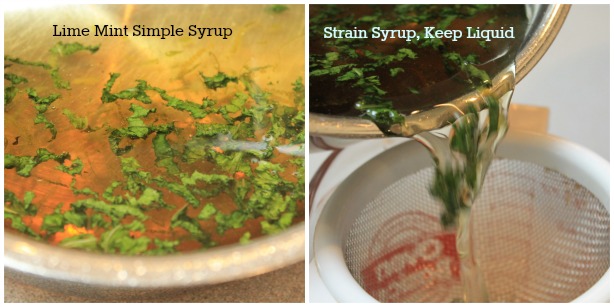 Combine lime/mint syrup, vanilla, milk, and cream in a large bowl. Mix together.

Pour into the freezer bowl of an ice cream maker.

Process for 20-25 minutes, until almost solid.

Add zest from the second lime and stir into ice cream.

Place in a separate container and freeze for 24 hours so flavors meld.

Notes From My Experience:

My mother taught me a long time ago to read through a recipe first. This is one of those times. The lime/mint syrup can take a little while to cool, so allow plenty of time for that.

**For an adult version, add 1/3 cup rum (I used Bacardi’s) to the liquid mixture before placing in freezer bowl.