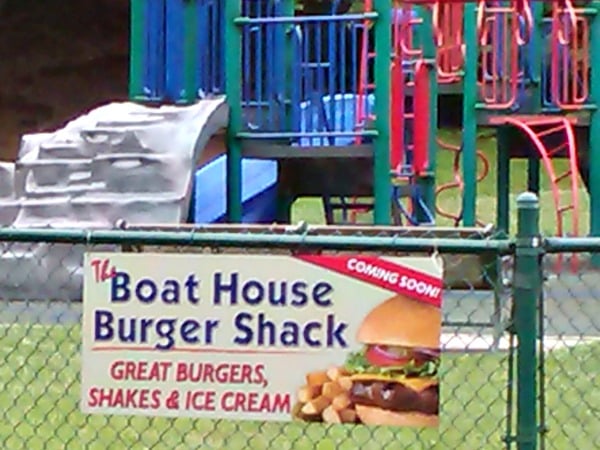 There’s a demolition crew in the Verona Park boathouse this morning, and a sign on the fence by the playground will tell you why: A new food vendor is coming to the park.

Aramark, a giant Philadelphia-based company that already operates the concessions at Turtle Back Zoo and the Codey Arena, has won the contract for the boathouse. According to Nick Centrone, the general manager for those locations, The Boat House Burger Shack will serve a continental breakfast complete with Seattle’s Best Coffee, as well as burgers (including veggie), shakes and ice cream. Prices will be budget-friendly.

The Boat House Burger Shack will open in late July, after the existing boathouse kitchen is gutted, cleaned and refurbished with new food preparation equipment. The lake’s paddle boats, which will also be managed by Aramark, will be back in service before that, possibly this weekend. Centrone, who was overseeing work at the boathouse this morning, said that all the boats will be refurbished over the winter and that Aramark will be introducing themed boats for the kids next year.

Aramark was awarded the three-year contract by the Essex County Board of Freeholders on June 19 after outbidding Ray’s Food & Ice Cream of Clifton, which had managed the boathouse for the last five years. Aramark will pay the county $2,550 in monthly rent. The concession had been put out to bid in February.

The new vendor is the latest in a series of improvements in Verona Park. In May 2012, the county began a $1 million upgrade that gave the boathouse all-weather decking and installed lampposts with a 19th-century feel along the walking paths. Also last year, Verona native and pro football player Anthony Fasano rallied a volunteer effort to build four new bocce courts and moved the annual bocce tournament for the Anthony Fasano Foundation to Verona Park (this year’s tournament is July 13).