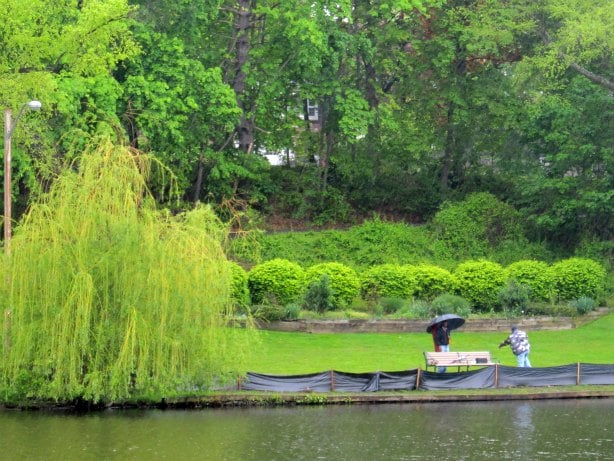 If you’ve seen all the black plastic lining the walkways in Verona Park now and wondered what was up, it is this: Essex County is replacing all the lighting there and the decking in the boathouse.

Essex County Executive Joseph N. DiVincenzo, Jr. and Essex County Parks Department chief Dan Salvante, a Verona native, announced the start of the $1 million project on Wednesday, May 2. The work is being funded by the NJ Green Acres program and the Essex County Recreation and Open Space Trust Fund. The 100 new light poles and fixtures will look like the decorative street lights already in use on Bloomfield Avenue and the loop near Verona town hall. The wires between the new fixtures will be buried in piping trenches and, by law, any time there is that kind of digging for construction, a silt barrier (the black plastic) has to be put up to limit runoff.

The wooden dock around the boathouse will be replaced with composite decking. Work is scheduled to be completed by August.

The Verona Parks Conservancy helped obtain the Green Acres grant for the county and the members in attendance at the press conference announcing the upgrades seemed pleased with the project details. “This is my third year as president of the Verona Park Conservancy and every single year we have rolled out something new to improve the park,” said Conservancy President Deborah MacEvoy. 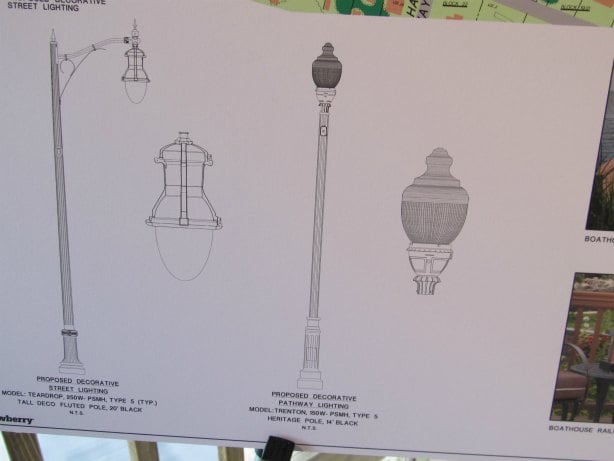 But Conservancy member Phyllis Friedman took the opportunity to ask DiVincenzo why the boathouse deck around the senior center room has been blocked off to the general public and what can be done to improve the food service at the boathouse. “We must redo that kitchen,” she added. DiVincenzo promised that the southern end of the deck would be opened and noted that the food contract is in its last year.

There have been many improvements to Verona Park over the last eight years. In 2003, the lake was dredged and the two children’s playgrounds were resurfaced with a soft, rubberized material. The Children’s Garden and outdoor reading area was created in 2004, the tennis courts were modernized, and a restroom was built near the playgrounds. There was work done around the dam in 2008 and a fitness course was added. The county has also worked with the Conservancy to plant new trees in the red oak grove at the park’s southern end. Verona Park lost its most famous tree, the Climbing Tree, in February 2010.

Virginia Citranohttps://myveronanj.com
Virginia Citrano grew up in Verona. She moved away to write and edit for The Wall Street Journal’s European edition, Institutional Investor, Crain’s New York Business and Forbes.com. Since returning to Verona, she has volunteered for school, civic and religious groups, served nine years on the Verona Environmental Commission and is now part of Sustainable Verona. She co-founded MyVeronaNJ in 2009. You can reach Virginia at virginia[email protected]