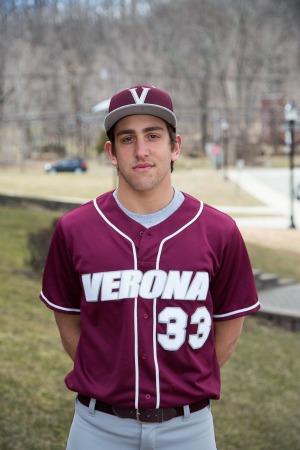 It was a long winter for Luke Sniatkowski. Sidelined by a leg injury, the senior missed what would have been his third season as a starter on the Hillbilly basketball team. But spring brought a new opportunity for the multi-season athlete, and he seized it. Luke Sniatkowski is this week’s Verona Sports Boosters Athlete of the Week.

On April 3, Sniatkowski took to the mound for the Verona High School baseball team, and pitched a two-hitter against rival Montclair Kimberley Academy. He got 11 strikeouts on the afternoon, including seven in the first three innings. In a perfect world, the game would have ended in a Verona victory. But one MKA player got across home plate, and the Montclair team went home with the win.

Sniatkowski has spent enough time in maroon and white to know that these things can happen. In addition to basketball, he was a four-year starter on football and a three-year starter on baseball, where he now serves as co-captain. A regular on the honor rolls at VHS as well, Sniatkowski is actively involved in the Youth Group at Our Lady of the Lake, and serves on its leadership committee.