A Poem For HBW’s Composer 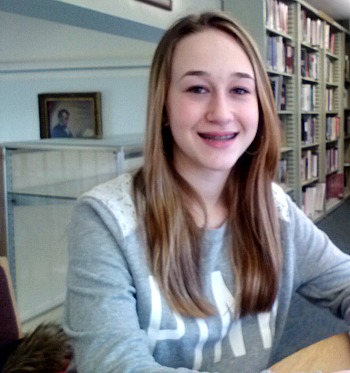 Cathleen Paluszek was at the assembly when composer Joseph Turrin came to H.B. Whitehorne in January. The eighth grader is not in the middle school’s music program and, she says, the assembly didn’t interest her at first. “I was extremely bored,” she admits.

“But then he made a statement that I really connected with,” she says. Turrin had been talking about how the World War II poem High Flight had inspired a piece of his music. ” ‘When you read the poem, you hear it in the music’, he said.”

Paluszek loves poetry. “Poetry is fun,” she says. “I am happy they teach it to us.” And so that weekend, on the drive home from a family weekend away, Paluszek thought about the assignment that had been handed to all HBW students: Write a poem that would inspire Turrin to create an original composition for the school’s Gold Band.  The composer was brought to HBW by a Verona Foundation for Educational Excellence (VFEE) grant given to music teacher Dan Halpern.

“I knew I wanted to make it good,” Paluszek recalls thinking about her poem. “I didn’t want to just do it because it was homework.”

She began to draft ideas on her iPad. The  first piece was the structure of the last line of every stanza, which begins “everything is”. The structure of the poem that she would come to title Everything Is Variant evolved into a subtle statement about the things that Paluszek likes best in each season of the year. “Summer is my favorite season,” she says. “But I think I wrote the part about autumn the best. I feel that you can get more words out of autumn.” When she finished, she copied and pasted it to the computer, and in her haste formatted the typeface and the font color wrong. But it was homework, and the assignment was due.

And then, like the other members of the student body, she waited to hear whose poem would be chosen, until the day that she was taking a Spanish test and Halpern showed up at the class. “It was a very big surprise,” says Paluszek. “I had never won anything like this.” The finalists for the contest included fellow eighth grader Rachelle Smith and sixth grader Mercy Neal; all three have had their poems displayed in the lobby at HBW. Paluszek hasn’t yet heard Turrin’s composition for the Gold Band, though she did get to meet the composer after a recent rehearsal.

The realization of what happened didn’t hit Paluszek until after the school day ended. “Later that night, on Instagram,” she says “one of my friends posted to me with the hashtag #poemwinner“.

The rain drops to the ground.
The flowers begin to burst with color.
The birds sing with joy.
Everything is blissful.

The weather is full of heat.
The beach is storming with people.
The sun is shining.
Everything is amazing.

The trees ripple with the wind.
The leaves begin to crash.
The breeze is crispy.
Everything is peaceful.

The air is chilled.
The snow is sticking.
The fireplace is glowing with warmth.
Everything is merry.