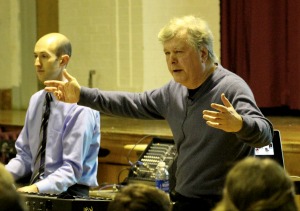 Most of the students at H.B. Whitehorne Middle School probably don’t go a day without listening to music. Heck, most of them spend some part of their day singing or performing music since chorus and band are the largest group activities at the school. But there was one musical activity that remained a mystery for most HBW students: How their music got created in the first place. Now, thanks to an innovative program, HBW students are learning how music is composed.

This past Tuesday, HBW hosted a day-long visit by Joseph Turrin, a nationally and internationally recognized composer who has created works for the New York Philharmonic, New Jersey Symphony and Wynton Marsalis, as well as the scores for movies like Nightmare on Elm Street 3. The kids at HBW were, predictably, the most impressed by this latter assignment and Turrin obliged them at the end of the day by playing a few bars. (You can listen to other Turrin works in these YouTube videos.)

The visit was the first step in a weeks-long effort that will involve the students in creating a piece of music that they will perform. Turrin was brought to the school by Dan Halpern of HBW’s music department (pictured above left with Turrin) and funded by the Verona Foundation for Educational Excellence, the non-profit that uses privately raised funds to enhance education in Verona.

Turrin’s first task was to explain the mechanics of composition. It turns out that it is a job like many others, that requires hours of work every day and lots of hustling for new business. Turrin told the students that even though he was teaching piano to Alan Alda’s daughters, it still took him 10 years of persistent letter writing to land an assignment to score one of the actor and director’s movies.

And then it was time to show how two notes made the difference between an ordinary day at the beach and terror. Turrin played an E and an F on his piano, which the kids almost instantly recognized as the opening notes of the theme song from Jaws. He showed them how that small theme developed into a musical story with a beginning, middle and end. “The point is to keep people interested in listening to the music,” Turrin said. “Just like you’d want a reader to keep turning the page of your book.”

Then it was time to talk about how words inspire music. Turrin showed the students “High Flight“, the World War II-era poem that has become something of a mantra to pilots, and he played the piece that he composed from it for the U.S. Air Force Band. On Monday, all HBW students will turn in an original poem, short story or song lyric. One of them will be chosen to be the basis of the piece for the HBW Gold band this spring.

“I don’t know what will inspire me,” Turrin told the students. “Write from the heart. Write what you know.”