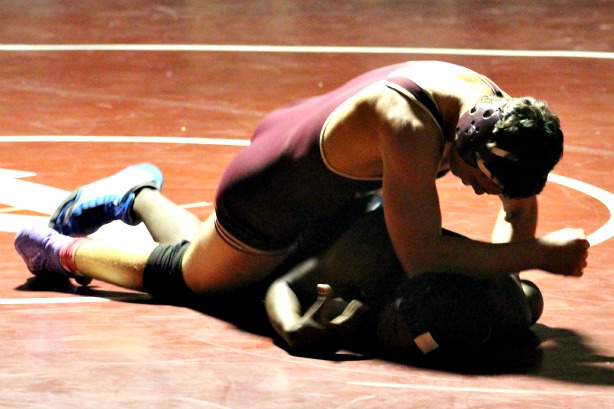 The seniors provided some dramatic pins as the Verona High School wrestlers defeated Irvington High School 39-35 yesterday at home. But the performances by several underclassmen should make the VHS grapplers a force to be reckoned with for several years to come.

Frankie Greco, this week’s Verona Sports Boosters Senior Athlete of the Week, set the tone for the match in the opening event, pinning Darnell Andrews in 1:12. That was followed by junior Quinn Cummings, a football player who has stepped into the heavyweight slot at 220 pounds. He pinned Donchard Jean-Paul in 1:06.

Then it was time for sophomore Joe Ballantyne to complete the hat trick. Wrestling at 106, Ballantyne took the clock for a ride before pinning Evander Jeanty 4:11.

Lou Mattia went the distance against Gery Destra before coming up at the short end of an 8-6 decision. Nick Esposito was ahead 5-2 when he pinned Nyreek Loyal at the 2:55 mark. Chris Virgadamo also pinned his opponent, Demari Williams, after leading in points for the entire match. Freshman Billy Gault put up a much more even defense against Lovensky Philippe than the 10-4 decision would indicate.

The match-up of the afternoon might have been freshman Mark Riggio against Jeanson Etienne. Riggio has moved up effortlessly from Verona’s Junior Wrestling program, and his strategies on the mat–backed by loud cheering from the crowd–earned him a 6-3 decision. Senior Joe Cordasco wrapped up the scoring for Verona by pinning Dyuenet Beaublanc at 1:26.

The wrestling team will be away at Millburn on Wednesday.