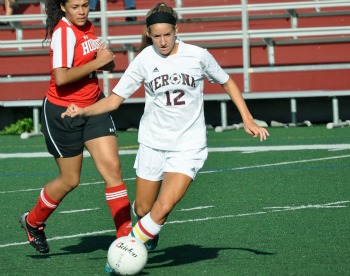 In soccer, the forwards get the goals, the goalie makes the saves–and the midfielder makes sure that all the good stuff happens at both ends of the field.

This fall, on the Verona High School girls soccer team, the busy position of midfielder has been the work of Co-Caption Christine Farawell. In recognition of her efforts, she is this week’s Verona Sports Boosters Senior Athlete of the Week.

While the lights were still off in much of Verona last Tuesday, Farawell’s strength at midfield turned the lights off on the Butler High School offense, helping the Hillbilly girls to an opening win in the NJSIAA playoffs. Throughout the season Farawell has shown the speed and versatility to run the game both ways, skills honed through three years on the soccer squad and participation in both lacrosse and the track relay team in the past.

- Advertisement -
Previous articleVerona View: The Hilltop & Sandy
Next articleFire Call At The Richfield