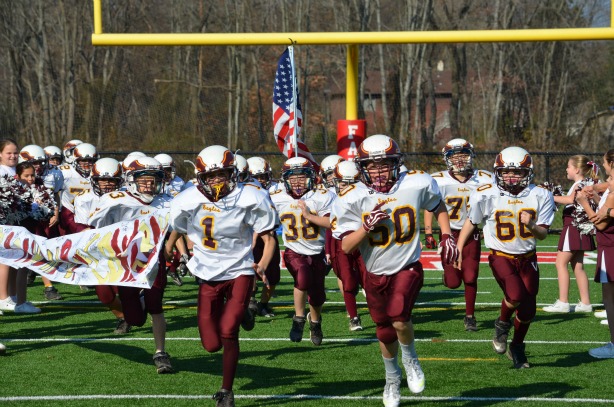 With the bad weather behind them, the Verona Eagles football teams returned to the field on Sunday. The A and C teams topped their opponents and head to the Super Bowl this weekend. The B team fell to a Nutley touchdown in the closing seconds of its game. Here’s all the action, courtesy of Dave Gautieri and Mark Riggio, with C Team photos by Dawn Scott Mulligan.

Coach Lupo’s A Team came out with fire in their eyes on Sunday, and that was not good news for the West Essex Cowboys. Many of these Eagles were on the field two years ago when West Essex spoiled their undefeated season in the Super Bowl. This time it was the Eagles who left the field on the right side of a 33-12 demolition of their rival and advanced to Sunday’s Super Bowl.

West Essex received the opening kickoff and found the Eagles D was not in a giving mood. Three plays and out and Verona was set to receive the ball.

CJ Lavery had two huge runs. The first one was 25 yards to the West Essex 19 yard line, and the second was from the 19 to the end zone and it was quickly 6-0 Eagles. Collin Kiernan booted the extra points out onto the street making the score 8-0 Eagles with 7:40 remaining in the first quarter.

On the Cowboys’ next possession, Mike Stanisci splattered the ball-carrier, who coughed up the ball and Lavery scooped it and raced 20 yards for the score and quickly the Eagles led 14-0.Kiernan then perfectly squib-kicked the ball to the right sideline and Mugsy Mughetto beat all West Essex players to the ball. The Eagles O was in business again.

Again, Offensive Coordinator Joe DeVivo looked to pound the ball on West Essex. Running behind Chris Lonergan, Austin Camp, Andrew Luehs, Chris Aldiero, Matt Gautieri and Stanisci, the Eagles backs Mike Mughetto and CJ Lavery were gaining yards in chunks. For the third time it would be Lavery running around the left side for a 12-yard TD behind a Mughetto block. Kiernan converted the extra points, and with 8:18 remaining in the second quarter and it was 22-0 Eagles.

West Essex managed to hit a long TD pass to close to 22-6, but they made the mistake of leaving time on the clock. Zach Zaccone dropped back – and dumped a screen pass to Mughetto, who followed an Austin Camp block and bolted 55 yards for another Eagles score. Kiernan was perfect and it was 30-6 Eagles at the half.

Opening the second half, the Eagles received the ball and in workman-like fashion marched towards the Cowboys goal line. Again, the offensive line was dominant. Lavery ran three straight times picking up two first downs while moving the ball to the 17 yard line of West Essex. The Eagles drove to the Cowboy 2 and were faced with a 4th down and elected to kick a field goal to stretch their lead to greater than three touchdowns. Kiernan booted the ball through the uprights and it was 33-6 and essentially ended the game. West Essex scored one late touchdown to make the final score 33-12.

This Sunday the Eagles will face the Hanover Park Hornets, who they defeated 6-0 in a hard-fought struggle earlier this season. –Dave Gautieri 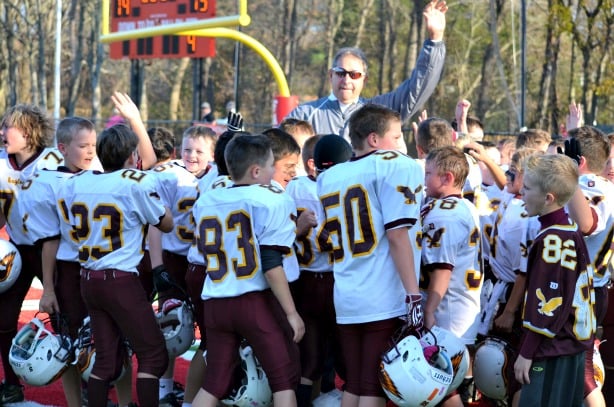 The Verona Eagles B Team fell one game short of the Super Bowl, losing to Nutley in the closing seconds 8-0 at Nutley High School. The Eagles finish the season with a 7-2 record.

Nutley took the opening kickoff and drove the ball to the Verona 34, but Brian Hipp and Brandon Cariani broke through the line and tackled the Raider ball-carrier for a loss on second down. On third down it was Nick Riggio and Matthew Frungillo who came up and stopped the runner short of the first down forcing a punt.

The Eagles too were forced to punt, but on the next series, Cariani, Matt Aldiero, and PJ Jordan converged on the Raider QB causing a fumble which was recovered by Jordan. After a penalty the Eagles were facing 3rd and 15, and Tom Sharkey passed to Frungillo for 35 yards down to the Nutley 35 yard line. However the drive stalled and as halftime came, the game was tied 0-0.

The Eagles received the second-half kickoff and immediately picked up consecutive first downs as Riggio & Frungillo followed the blocks of Pat Haughney, Jack Gautieri, Christian DiOnisio, Zach Balogh, Aldiero and Cariani. Again the Eagles made it deep inside Nutley territory, but the Raiders intercepted a pass at the 10 yard line to preserve the scoreless tie. Cariani and the D again stepped up. Anthony Zamloot, Nick Giuliano, Sharkey, Gautieri, and Tom Kellner all made big plays. Cariani was in the backfield most of the game sacking the Nutley quarterback twice.

Verona once again had the ball. This time fullback Kellner pounded it between the tackles three straight times gaining 17 yards. Still the Eagles could not keep the drive going and looked as though they were going to try and win in overtime for the second consecutive week.

Nutley changed all that. After picking up consecutive first downs, the Nutley quarterback dropped back and hit his receiver for a 30 yard TD pass with just 32 seconds remaining. The extra point kick was good and Nutley led 8-0, which would be the final score of the game.

Coach Shields praised his players for never quitting and leaving it all out on the field. The coaching staff could not be more proud of a great group of boys who played their hearts out all season long. Good luck to Nutley and Fairfield in the Super Bowl Sunday at Centennial Field. –Dave Gautieri 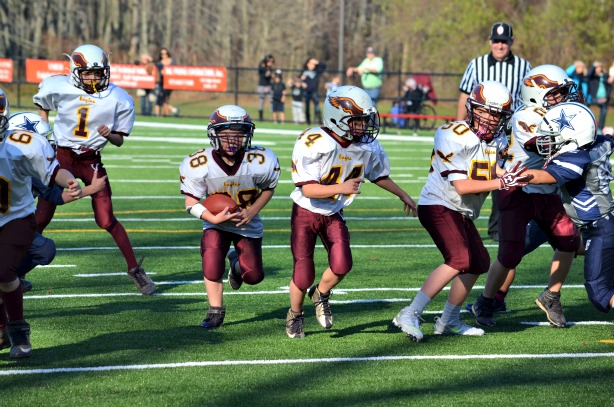 On Sunday November 11 the undefeated Verona Eagles C Team had a rematch against the West Essex Cowboys for a chance to be in the league championship. The Eagles started off the game with a great kickoff by Jack Lonsinger starting the Cowboys back at their own 25 yard line. The Eagles defense came out flying stopping West Essex in three plays and forcing them to punt. The Eagles offense had problems moving the ball as well and gave the ball back to the Cowboys.

After a scoreless first quarter and the Eagles defense made the Cowboys punt and Verona took over on the West Essex 49 yard line. After two running plays for a first down RB Frankie Riggio took the ball 40 yards for a touchdown behind the blocking of Michael Matarazzo, Quinn Zebrowski, Jake Milmoe and Steven Petro. The extra point attempt failed and the defense held the Cowboys again and went into halftime leading 6-0.

The Eagles received the kickoff in the second half and took over on the West Essex 49 yard line. The O-line lead by Milmoe, Zack Bucher, Jason Zerin, Jackson Seawright, Miles Nippes and Tommy “T-Bone” Manganello moved the ball on the ground to the 26 yard line. Pierce Coppola completed a 25 yard pass to Lonsinger to get the ball to the 1 yard line. After a penalty on Verona Riggio scored on a 3 yard run and also ran in the 1 point conversion to put Verona up 13-0 nothing going into the 4th quarter.

In the 4th quarter Verona let up 2 touchdowns, one in the air and one on the ground, and Verona found themselves all tied up 13-13 going into overtime. West Essex got the ball first and on the second play Milmoe stripped the ball carrier and Coppola recovered the fumble. Verona took the possession next on the 20 yard line and after two runs by Riggio that brought the ball to the 1 yard line Coppola did a QB sneak to win the game.

The Eagles C Team will face the Nutley Raiders in the Super bowl on Sunday November 18 at 1:30 p.m. at Centennial Field. –Mark Riggio 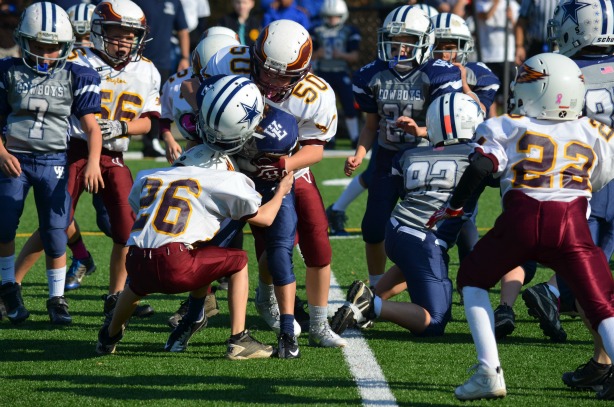