The Verona Eagles teams took on Caldwell this past weekend. Dave Gautieri has the B team victory, while Mark Riggio covered the C team rout. Dawn Scott Mulligan took the photos of the C team in action. 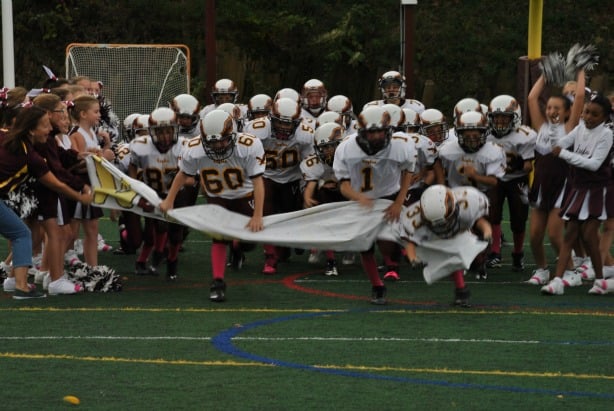 Saturday night the Eagles B Team needed to rebound from their first loss of the season, and that’s just what they did. Interim Coach Steve Aldiero pushed all the right buttons in guiding the team to a 29-6 victory at Centennial Field.

Tom Sharkey opened the scoring with a 60-yard touchdown run. Sharkey then passed to Matt Frungillo for the two-point conversion and it was quickly 8-0.

The Chiefs answered back with a long touchdown run, but the Eagles D stopped the extra point and it was 8-6 Eagles.

Frungillo broke off a 45-yard run down to the Chiefs three yard line and the Eagles were once again knocking on the door. Sharkey would score on a three-yard QB sneak and then hit Pat Haughney with the extra points and the lead was stretched to 16-6 as half-time arrived.

Nick Riggio scored on a 35-yard TD run in the third quarter to increase the lead to 22-6 behind some tough blocking by Matt Aldiero, Jack Gautieri, Anthony Zamloot and Brandon Cariani.

Zamloot would score the game’s final touchdown from three yards out and Brian Hipp ran in the point after to make it a 29-6 lead, and that’s where it would end.

Hipp and PJ Jordan both played well defensively, each recovering a Chief fumble. Tom Kellner also ran the ball well with runs of 10 and 15 yards respectively.

The Eagles will travel on Sunday to East Hanover to take on the East Hanover/Florham Park Hornet-Falcons. Come watch as the Eagles try to move their record to 5-1. 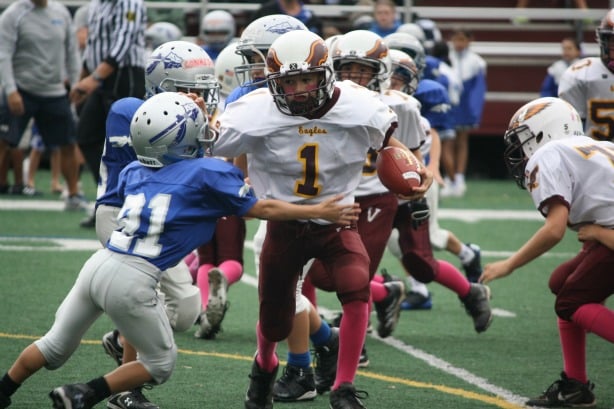 On Saturday October 6, the undefeated C team ambushed  the Caldwell Chiefs 22-8. The Eagles started on defense and DL Jake Milmoe recovered a fumble on the first play after he drove back the center into the backfield. The Eagles quickly took advantage of the turnover with a strong ground attack from RB Frankie Riggio and QB Pierce Coppola, which resulted in a five-yard run from Riggio behind offensive linemen Jackson Seawright, Jason Zerin and Miles Nippes. Verona converted the extra point play with a pass from Quinn Zebrowski to TE Steven Petro.

The defense took the field again and after hard tackles from Milmoe, Al Lombardi and Mike Matarazzo the Chiefs had to punt to Zebrowski who had 10 yard punt return to the Caldwell 46 yard line. Verona continued to pound the ball with punishing runs from Matarazzo and Zebrowski which set up a 44-yard TD run from Riggio with the blocking from Bucher, Radigan and Coppola. The extra point pass from Coppola to a diving TE Radigan was good to extend the lead to 16-0.

The defense remained solid throughout the game and with the Verona offensive line continuing to blow back Caldwell’s defense, Riggio added one more TD with a five-yard run.

On Sunday October 14, the Verona Eagles C-Team will be on the road against the  East Hanover Hornets. 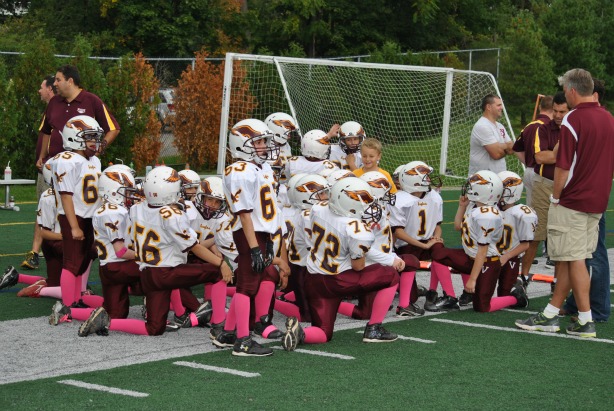