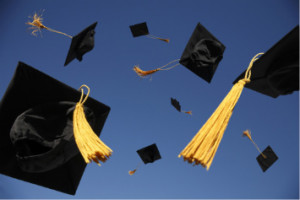 Students from Verona have earned undergraduate degrees from several area colleges and universities this spring. If you have a student whose higher education achievements deserve recognition, send details to us by e-mail.

Colgate University: Mark Bernard Janett graduated with a bachelor of arts in environmental geography and economics.

Cornell University: Jeffrey Schreier received a bachelor of science from the School of Hotel Administration. He also received the Bordeaux Education Prize to study wines in Bordeaux, France.

Smith College: Caitlyn Shayne Kirby received her A.B. in anthropology and biological sciences. As president of her class, Kirby gave the student address.

Stevens Institute of Technology: Jameson D. Mortimer graduated with a bachelor of science in computer science.

Syracuse University: Emily Ramon graduated from the College of Visual and Performing Arts with a major in illustration. She was recognized at the May convocation for being a graduate of the Renee Crown University Honors program.

University of Scranton: Sean B. McNichol earned a bachelor’s degree in finance in the Jesuit university’s Kania School of Management.

Washington and Lee University: Reid O’Neill Coopersmith received a a bachelor of science with Special Attainments in Commerce.