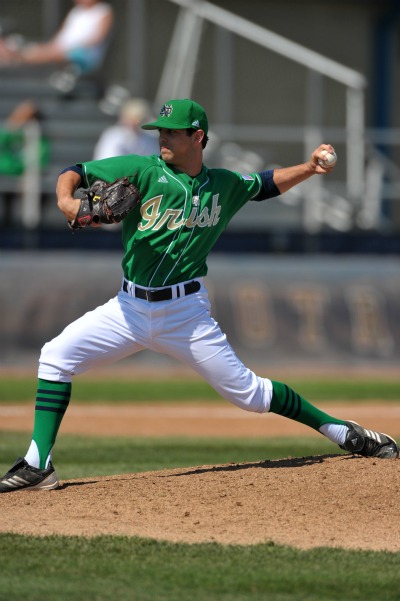 Joe Spano, a Verona native who currently pitches for Notre Dame University, has signed a minor league free agent contract with the Toronto Blue Jays.  He will report to the Jays’ spring training complex in Dunedin, Fla., for a club minicamp on Saturday.

“I’m incredibly excited and thankful for this opportunity to keep playing baseball with the Toronto Blue Jays,” said Spano in a statement released by Notre Dame. “I can’t thank our coaching staff and my teammates enough for pushing me to be better every day. You don’t choose Notre Dame to be average, and our coaches and teammates exemplified that each and every day in the effort we put forth.”

“Joe, for a lot of reasons, is a true example of perseverance,” said second-year head coach Mik Aoki. “To come back from major arm surgery is a credit to his hard work and commitment to his rehab. Joe’s first few outings in the fall were rather difficult for him, but he emerged as a stopper for us out of the bullpen and was critical to our success this season, particularly against left-handed batters. It would have been really easy for Joe to feel sorry for himself or make excuses, but he stuck with the program, returned to form, and now is getting the opportunity he deserves.”

Spano pitched in 65 career games and made two starts. His 65 appearances rank just outside the top 10 in school history. Spano posted a career 1-8 record with a 5.11 ERA. He collected 45 strikeouts in 61.2 career innings and limited his opponents to a .252 career batting average.

After missing the entire 2011 season following so-called Tommy John ligament reconstruction surgery, Spano appeared in 29 games in 2012. He logged 21.0 innings of work with 13 strikeouts. He went 0-4 with a 3.43 ERA and limited his opposition to a .232 batting average.