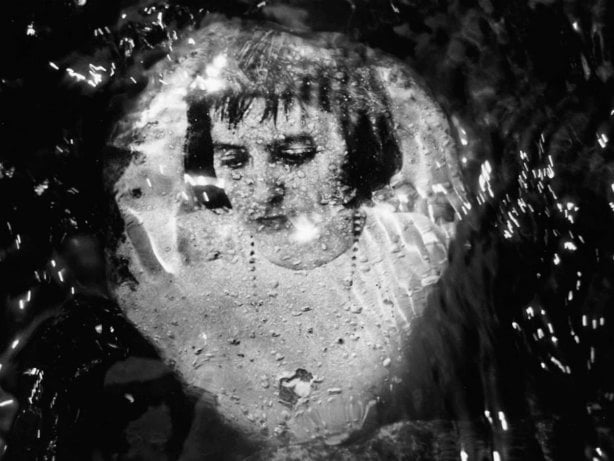 Pamela Petro grew up around rocks. Her father Stephen Petro, who passed away in March, was an avid rock collector who would often talk about his finds with children at F.N. Brown elementary school.

But Pamela Petro told her stories differently–or at least she used to. After graduating Verona High School with the class of 1978, she went on to become a widely published travel writer and author. She turned the challenge of learning Welsh in graduate school into a travelogue about Wales, Travels In An Old Tongue.  She celebrated the southern American tradition of oral story tellers in a collection entitled Sitting Up With The Dead.

And then, in 2006, she published The Slow Breath Of Stone. It told the story of a young couple who had gone to southern France 100 years ago to photograph the Romanesque basilicas there. As Petro delved into their lives and the photos they took of quarries and stone cutters, she began to think of the stories that stones could tell–if given a chance. “I finished the book, but I couldn’t let go of the idea of photography and stone,” she says.

Petro discovered that there is a liquid photo emulsion that could, in theory, be used to print a photograph on anything, including rocks. Working in a darkroom in her home in Massachusetts, she went through months of failures as she tried to perfect the process. And then one day, the image of a friend’s face on a stone floated up out of the developing tank. “I had brought that snapshot moment and the eternity of the rock together,” she recalls. 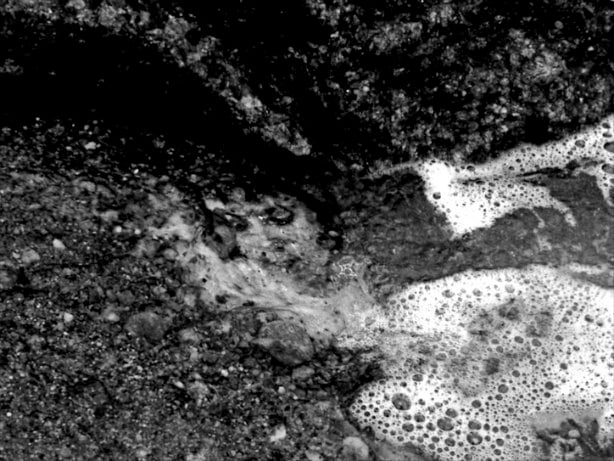 But she wasn’t done. Petro began photographing the printed rocks in their former element. The photo of a friend at top is on a stone taken from and put back into the Mill River near Northampton, Mass.; the same image, above, was also printed on a beach rock, above, and put into the surf off Cape Cod. “In exposing the rocks to the elements,” she says, “you literally watch the mortality process speeded up.” And she got to witness other people’s reactions to her work, like a little girl who saw some of her stones in the Mill River. “She said, ‘Thank you. I’ve always thought the river was magic and now I have proof’.”

Petro calls her creations Petrographs. “I was really lucky with that name” she concedes. But not all her images have been printed on stone. The series below, of her older brother Craig Petro and his wife Marie, was printed on driftwood and returned to the Chesapeake Bay near their home in Virginia. Petro has also printed on leaves and feathers. 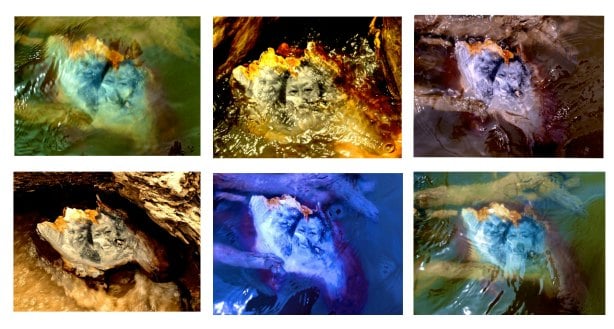 And she has been able to experiment among one of the biggest rock formations on earth: the Grand Canyon. Petro, who teaches writing at Smith College and Lesley University, was chosen last year for an artist-in-residence program at the canyon. As a protected a national park she couldn’t take rocks from it, so she photographed shadows on rocks from the south rim, took them home and printed them on beach pebbles to relate to the time that the canyon used to be under water.

Petro, who sells the images that she creates from her blog, marvels at the turn her life has taken. “I grew up with rocks but didn’t pay a whole lot of attention to them until I was 40. Then I organized my travels around stone,” she says. “All of a sudden you find yourself standing in hipboots taking pictures of rocks.”