Send The Troops A Thank You Through PostNet 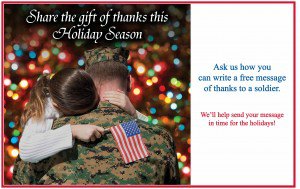 Maybe you know someone on active service in the military, maybe you don’t. Either way, PostNet has put together a way for you to send a holiday message to the troops.

Partnering with Military Moms, a nonprofit created to support families of military personnel, PostNet (located at 281 Bloomfield Avenue next to 7Eleven & Lapels Dry Cleaners) will provide cards like the one shown here for your message. PostNet will also have cards available at its table for Fair In The Square on December 3.

“The holidays are particularly hard on those stationed far from family and friends,” says Scott Harrington, owner of PostNet in Verona. “We want to bring an opportunity for individuals, regardless if they know someone personally overseas, to write thoughts of appreciation and gratitude to those fighting to protect our country.”

The program, which is available throughout November, will provide cards and postage, free of charge, to anyone looking to lift spirits of military members. By December 3, PostNet will send the holiday cards to Military Moms, which will distribute them among various APOs, FPOs and DPOs overseas in time for Christmas.

In addition to the cards, PostNet also encourages people to go online to PostNet’s Facebook wall, “like” its page, and write a message that will then be included on large banners and dispersed to various military posts around the world. “PostNet has always supported programs designed to support or give back to our active military members and veterans,” says Harrington. “This is our way of giving back, while providing a service for Verona and the surrounding area residents to send well wishes to our brave soldiers.”