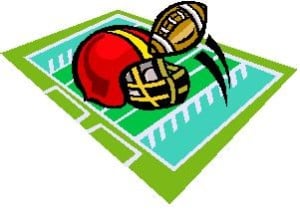 Nutley came into Sunday’s playoff game versus the Eagles A Team undefeated and the number 1 seed. They left the field on the short end of a 16-6 score.

Nutley took the opening kick-off and marched right down the field to score the game’s first points. But an errant snap doomed the extra point, which was huge. Frank Ferrari hit Luke Connell for a 40-yard gain down the middle of the field and the Eagles were in business. Mark Bennett would pound it over from the one and with Brian Liggio’s extra point, the Eagles were on top 8-6. Great kickoff coverage pinned the Raiders inside their 20 yard line. Big Sam Cummings drilled the ball-carrier who coughed up the ball and Jimmie Crawford recovered the fumble giving the O great field position. Ferrari wasted no time, hitting Connell in the corner of the end zone for a spectacular touchdown pass. Liggio again booted the extra point and the Eagles led by two scores 16-6.

From there the D took over. Nick DePaul, fueled by his father’s sausage and peppers, had multiple QB sacks, causing a fumble on one of them. Coach Lupo gave credit to his entire team for stepping up their game. On Offense, Stephen Kellner, Billy Ferrari, Matt Zebrowski, Mike Cifaretto, Matt Riccitelli, and David Gautieri all contributed. Defensively, Mike DeSomma, Brian Valentine, Ryan Cariani, and Brian Wagner all played at a high level. The Eagles have a chance to avenge their only other defeat in the Super Bowl when they take on the Livingston Lancers this Sunday at Centennial Field.

The Eagles B-Team reached the Super Bowl with an impressive 20-6 win over a game but over-matched Caldwell Chiefs Team. Coach Gerald DeLuisi vowed all week to set the tone of the game on the first play by running Chris Aldiero up the middle. Aldo pounded for 9 yards and the Chiefs knew they were in for a long day. Jake “Hoot” Houthuysen had an electric 20-yard run and soon the Eagles were knocking on the door. Mike “Mugsy” Mughetto bolted in from 3 yards out and the Eagles led 6-0. On the next possession, the Chiefs mounted a drive into Eagles territory, but Matt Zaccone jumped a pass route, picked the pass off and ran 30 yards to midfield. Zach Zaccone passed to Colin “Slappy” Kiernan for both the touchdown and extra points, and it was 14-0 Eagles. Just before the half, Matt Gautieri broke free and crunched the Chiefs quarterback who threw a pass up for grabs that Kiernan intercepted.

But the Chiefs would not go quietly. They scored on the opening drive of the second half to close the gap to 14-6. That’s when the Eagles showed what they were made of. Running behind the O-Line, Austin “Big Sexy” Camp, Zach Skrivanic, Andrew Leuhs, Matt Gautieri, and Chris Lonergan, Mike Stanisci, and Kiernan, the Eagles marched right down the field. A Hoot 32-yard run led to a Mugsy 2-yard plunge and it was 20-6. Defensively, Aldo and Leuhs stopped The Chiefs on 4th and 1 to seal the game.

This Sunday the Eagles B-Team will face their arch-nemesis, the West Essex Cowboys, in a battle of 8-0-1 teams at Centennial Field.

The Eagles C-Team pounded the West Essex Cowboys 30-8 on Sunday, advancing to the Super Bowl.

Coach DiTrani did not panic when the Cowboys scored on the second play of the game. Instead, his team responded. On 4th and 15, Tommy Sharkey hit Zander Zebrowski for a 25 yard gain to the 15 yard line. A few plays later Sharkey scored from the four, and when he ran in the extra points it was all square at 8-8. Brandon Cariani swallowed up the ball carrier and recoved a fumble to give the ball back to the offense. Most people in the crowd and on The Cowboys D had no idea who had the ball when Nick Riggio bolted 14 yards around the right end to score off the old “Fumble-rooskie” play. The Eagles had their first lead at 14-8. Isaac Skrivanic placed a perfect on-side kick, and again the Eagles were on O.

A pitch pass from Pat Haughney to a wide-open Anthony Zamloot for 30 yards would set-up Sharkey’s second touchdown dive of the day making it 22-8. Sharkey would later add an interception and a third touchdown run to close out the scoring. Matthew Frungillo added a circus catch for a 25-yard gain on the final touchdown drive. Defensively, Matt Monroe, Zach Balogh, and Garreth Jenkins all contributed huge plays.

Coach DiTrani’s squad will look to avenge their only defeat when the take on the Fairfield Falcons Sunday at Centennial Field.