A Day Out With Thomas–Jefferson 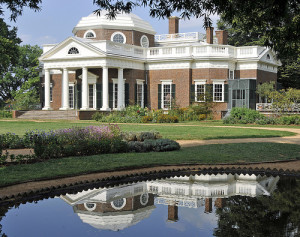 Monticello is not a day trip from Verona. But with a little bit of planning, you can see Thomas Jefferson’s beloved Virginia home in a long weekend, maybe even in a regular weekend.

Taking the advice of Verona teacher Linda Wangner, we left after school and headed west on I-78 and then south on I-81. If the traffic gods are with you, you can be south of Harrisburg, Pa., by dinner time. There are plenty of hotel options along the Pennsylvania-Maryland border and, in the morning, you only have another 3 hours to drive to Charlottesville, Va., where Monticello is. These roads are heavily traveled truck routes, which can make them tricky at times, particularly since the 70 mph speed limit in West Virginia and Virginia encourages the truckers to embrace their inner Governor Corzine.

If you are a Civil War buff, you’re obviously not going to want to make the trip this fast. Battlefield after battlefield lines this route. You’re also going to want to plan a more leisurely trip if you want to take in the Skyline Drive in Shenandoah National Park. If want to do Monticello on the fast track, though, you’ll still get plenty of beautiful Shenandoah Valley vistas after you turn east on I-64.

Monticello is just south of Charlottesville. At the visitors’ center, you’ll have your choice of ticket: A basic house & grounds ticket will be just enough for most visitors, but if you want to see the Dome Room on the third floor, you’ll need to get what they call a “Behind The Scenes” ticket. Our guide was kid-friendly enough that we didn’t feel the need to do the separate children’s tour.

The house tour takes about 30 minutes and then you’re on own. You can wander the underground passages through the cellars and the grounds, but you definitely need to plan on going back to the visitors’ center. The education center there has several exhibits on Jefferson’s life and works, and the Griffin Discovery Room lets kids try replicas of some of Jefferson’s inventions, like the polygraph machine that he used to make copies of every letter he wrote. In all, you’ll need at least two hours for Monticello, longer if the weather is nice and you want to take in all of the landscape.

When you’re done, you can head an hour east to Richmond, which has a very nice science museum (not as good as the New York Hall of Science, but the Segways and kugel balls in front were a blast). Or take a north-by-northeast route and you’re in Washington in two and a half hours. In all, you’ll put about 800 miles on the car. But they’re well worth it.

Home page photo by Dyanna , Monticello photo by Tony The Misfit, both via Flickr.