Eighteen people, including several who have already addressed budget matters at recent Town Council meetings, came to Tuesday night’s Board of Education meeting to appeal for cuts to Verona’s school budget. Among the ideas they put forward were an end to spending on extra-curricular activities, school sports, the school Web site and Mandarin, as well as larger class sizes.

The budget was not formally on the agenda at the meeting, having been approved by Verona voters in April by a margin of 1130 to 1048. But when the meeting was opened for public discussion, the budget was the only topic of discussion. The board handed out a 48-page booklet of facts about the school budget, which reprised much of the material that was given out ahead of the budget vote this spring. And board President John Quattrocchi disclosed that he had met privately last week with Susan Montanile and Elizabeth Knoop, who have been among the leaders of the tax protest movement, to review school budget procedures.  Montanile and Knoop, longtime residents of Verona, both took the microphone during the public discussion session and said that it was the first time that they had attended a Board of Education meeting.

Board members repeatedly directed the audience to the fact book, available at the BOE’s office, to emphasize that they have been containing costs for a long time. Quattrocchi noted, in response to a call for a freeze on discretionary spending, that the current board and its predecessors had cut this category by 30% over the past decade.  He also pointed out that the budget approved for the 2010-2011 school year, which cut staffing by 5 1/2 positions, was actually slightly less than the 2009-2010 budget. After Bojana Lezniki, a 22-year resident who was also attending her first BOE meeting called for cutbacks in school funding for sports, Quattrocchi noted that freshman sports at VHS had already been eliminated under the current budget and that parent organizations now raise more than $150,000 in funds to support sports and extra-curricular activities. 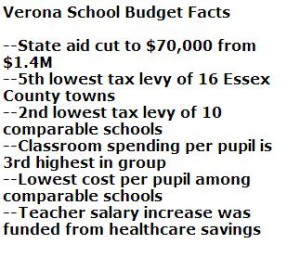 But Quattrocchi was quick to dispel any notion that the next school budget could provide cuts large enough to reduce property taxes by $1,000 per household, which some of the residents who are questioning Verona’s taxes are seeking. He noted that, to meet that goal, the BOE would need to cut $5 million from the budget, which would mean laying off 100 of Verona’s 180 teachers.

Tuesday night’s meeting will be available on VTV, the town’s public access television channel, soon. VTV is broadcast on Comcast channel 35 and FIOS channel 24. The next Board of Education meeting is Tuesday, September 14 at 8 p.m.