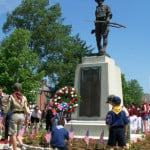 An Iraq war veteran who received a medal in Verona’s Memorial Day ceremonies this year has voluntarily returned that medal.

The award, a Verona Distinguished Service Medal, is given by the town to honorably discharged veterans. The recipient, Angelo Otchy of Verona, was honorably discharged from the Iraq war. Following the ceremony, however, in a newspaper interview, Otchy claimed that he was a survivor of a Humvee bombing that claimed the lives of three U.S. soldiers. The Star-Ledger reported early this week that his account was untrue. Verona’s town manager, Joe Martin, had said when the report was published that Verona would not rescind the award despite the newspaper disclosure.

In an e-mail to MyVeronaNJ, Otchy apologized for his actions on Memorial Day.

“I am sorry for my actions to all the people in Verona,” Otchy wrote on Tuesday night, “and I will work very hard to earn everyone ‘s respect; only God can judge me since no one else is without sin. I deeply regret my actions and I was not in the right mind of thinking that day after being in the sun for 2 hours without any water and what I said is not what I meant in my heart.”

“I want the people of Verona to know how deeply sorry I am and I am willing to do whatever it takes to restore my name in this town,” Otchy wrote. He noted that he has worked to serve the community and surrounding areas in several ways, raising money for wounded veterans and collecting clothes for the homeless in Newark and Paterson.

“He tries to be a good family man,” says Father Brian Page of Our Lady of the Lake church, noting that Otchy is active in the parish and OLL’s school. “He was struggling when he came home, and he has pulled himself together quite a lot.”