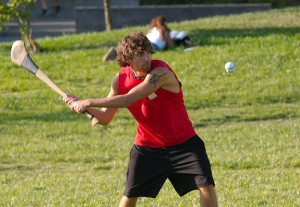 Some folks in Verona know Eamonn Ryan as a wrestling dad. Some know him as a musician. But he’s also the president of Division #9 of the Ancient Order of Hibernians, and next weekend he’d like to show you the national field game of Ireland, a sport called hurling.

On Sunday, June 13, the Ancient Order of Hibernians and the Friendly Sons of Shillelagh will be holding their annual Gaelic Sports Expo. The event will be at the Shillelagh Club in West Orange from 1 to 8 p.m.  The day includes hurling matches, food, beer garden, live entertainment, kids’ bounce castle, vendors, face painters and more, and the cost is just $20 for adults, $5 for kids ages 12 to 20 years old, and free for children under 12.

So just what is hurling? Ryan, whose band will be performing at the Gaelic Sports Expo, says it is considered “the fiercest and fastest of all team games” and notes that, like lacrosse, it is a ball-and-stick game. But that’s where the similarities end. Here’s Ryan’s guide to the sport:

Whereas lacrosse is played with netted sticks, hurling is a played with a flat wooden club, and the ball is struck by swinging the stick versus flinging it as in lacrosse.  Hurling players can catch and carry the ball in their hand, but can only pass it by hitting it with the stick, kicking it, or slapping it by hand.  It is played by two teams of 15 players, who use sticks (hurleys or camans) made of ash to hit a small, hard ball (slitter or sliothar).  There is not much protection worn by the players, basic soccer shorts and jerseys with helmets optional. Points are scored by hitting the sliothar into a goalie defended net for 3 points, or hitting the sliother over the top bar of the goal inside the posts for 1 point.

Use the map below to generate directions to the Shillelagh Club.