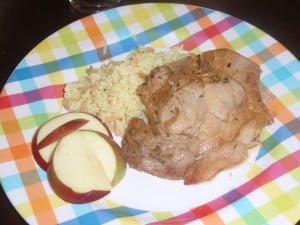 So, it was Alton Brown and the Food Network to the rescue for dinner. I made Slow Cooker Pepper Pork Chops. These were delicious, and the brining the night before really helped to fully tenderize and flavor the meat. Beyond that it’s an easy recipe and everyone liked it.

Notes from my experience:
As I decided to make this recipe at 9pm the night before, I used water rather than vegetable broth for the brine. Also, the recipe called for 4 pork chops, I had 6. The liquid measurements for both the brine and the cooking worked out fine.

I’m not sure if we were supposed to eat the apples after they cooked, but I didn’t it. Way too mushy for me.
And finally, I used only half of an onion- it was all I had, but it worked out fine as well.