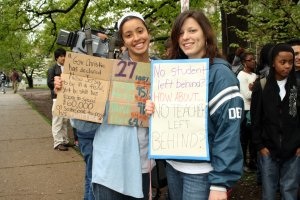 School budget cuts brought out student protesters in Montclair, West Orange and other towns around New Jersey early this week. Baristanet reported that some 150 Montclair High School students took to the streets at the corner of Park Street and Chestnut on Tuesday morning with signs and musical instruments. (The Huffington Post reported the walkout as half of MHS’ student body; we’ll take the local report as gospel.) The state Department of Education was not amused.

In other news around Verona this week, Cedar Grove police found electronic devices in two gas pumps at the Exxon gas station at the corner of Pompton and West Bradford avenues that could be used in credit card fraud. The devices, known as skimmers, can copy and store a credit card number for use in an unrelated transaction. But according to a report in the Star Ledger, Cedar Grove police did not know if any gas station customers had been the victim of identity theft.

Fewer trips to the DMV may be in your future. NewJerseyNewsroom.com reported that the state’s Motor Vehicle Commission may end inspections for mechanical defects. The department’s head told the news site that less than 6% of cars inspected are rejected for mechanical problems. The move could save New Jersey $12 million a year.

A state effort to cut costs in another area is meeting resistance. The New Jersey Education Association is up in arms over a new law that requires a mandatory contribution to their health insurance. According to NewJerseyNewsroom.com, the law seeks to garnish just 1.5% of a public school employee’s salary.

NJ.com also reported that Fairfield has unveiled a $17.2 million budget that would raise taxes there by 11%. Fairfield is laying off 14 workers and reducing two to part time.

And, finally, the oddest story of the week: A Ginsu knife, the product that 30 years ago kicked off the infomercial craze that plagues us still, made its way into the chest of a motorist in Montclair. The man’s wife was arrested, Baristanet says.