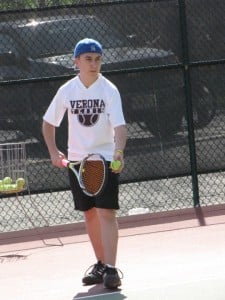 The Verona Boys Tennis team started the 2010 season off with a bang by winning its first two matches against Essex County foe Bloomfield and former CHC rival Kinnelon.

Verona looked to be in mid-season form in the opener, blanking Bloomfield 5-0.  Paul Corrente won his first singles match 6-2, 7-5, while Mike Streifer was victorious in second singles 7-6 (7-5), 7-5. Captain Noah Herman took care of business in his third singles match by winning 6-1, 6-1.

Will Schenkel and Matt Tuorto took the first doubles match 6-1, 6-3 and the team of Mack Kirby and Brian Farrell shut out the Bloomfield second doubles team 6-0, 6-0.

Against Kinnelon, Verona was nearly perfect again winning the match 4-1. Corrente,  Herman, and the team of Schenkel and Tuorto all took their matches while Mack Kirby and Brian Farrell continued their streak of not allowing a game in another 6-0, 6-0 victory.

Unfortunately, the Hillbillies had some trouble with Solomon Schechter on Wednesday, dropping the match 3-2.  Only the doubles teams were able to pull out wins for Verona.

The boys, who seem to have a match nearly every day, hope to get back on the winning track today at 4:00, home against Glen Ridge.

Previous article
Are You Sharing?
Next article
Hillbillies Have Strong Showing At Summit Relays