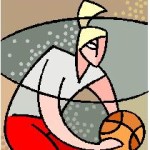 The Verona Girls’ Basketball team took home a victory in the consolation round of the West Essex Holiday tournament at Caldwell College today against arch-rival Cedar Grove, 34-24. After three quarters trading basket for basket, the Verona girls pulled away in the fourth quarter after a Kara Bartow steal and conversion. Michelle Petronaci, Gianna Pignatello and Amanda Langan also contributed to the win.

The Boys’ Varsity also played in the consolation round today but lost to West Essex 55-46. Despite a close score at the half, the Verona team couldn’t prevent a West Essex run-up in the second half, largely on the strength of West Essex’ Miles Young, who ended with 18 points. Brian Farrell had 11 and Jack Denton had 8 for Verona.