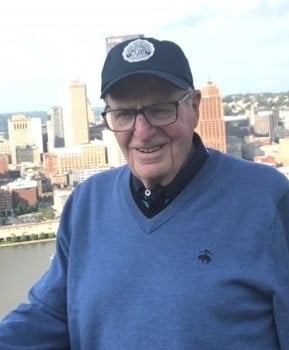 Robert M. Leonard, Bob, passed away on December 16, 2022, at the age of 95. He was a graduate of Central Catholic High School in Pittsburgh, PA, where he was ranked number one on the tennis team. In March of 1945, at age 17, Bob and George, his twin brother, enlisted in the Navy. They were assigned to the same ship, the USS Jason during World War II, as medics with no prior experience.

After the war, Bob attended the University of Pittsburgh on the GI Bill, where he received a B.S degree. While at school, Bob married his childhood sweetheart Mary Martha (May) Dalzell. After graduating, Bob joined Rockwell International. After two years, he was transferred to the NYC Sales Division where he was employed in various positions for his entire career. He received the “Rockwell Man of the Year” Award and was a lifetime member of the Society of Gas Operators (SOGO).

Bob was a 45-year member of the Upper Montclair Country Club where he served two terms on the Board of Trustees. He was proud of his two hole-in-ones at the club. Besides golf, Bob enjoyed reading history books and traveling. He made it to all but two of the 50 states, as well as Europe and the Far East. Bob had an incredible desire to live and a sharp mind. He was engaging, witty, and strong-willed. He never found a sport that he didn’t enjoy. He particularly loved everything Pittsburgh, especially the Steelers and Pirates. He loved his 62-inch TV, iPad, Alexa, news programs, basking in the sun on the deck, big breakfasts, and our dog, Penny.

He is survived by his son, Michael; daughter, Nancy; grandchildren, Ryan, Morgan and his wife Miriam, Katie, and Maddie; and great-grandchildren, Mila, Jayden, and Kalei; sister, Ina and her husband, Joe; sister-in-law, Anne; several nieces and nephews whom he adored. He was preceded in death by his wife, May; son, Jerry; parents, John and Lavina; siblings, George, Jack, and Jim. Thank you to his caregivers from the past couple of years, especially Ana and Andrea who were with him for his final days.

In lieu of flowers, donations can be made to: Verona Rescue Squad, https://veronars.org, 12 Church Street Verona, NJ 07044