VHS football is famed for its ability to fight until the end, which is exactly what happened Friday night when they took on Morris Catholic. Morris Catholic just edged out the home team in a high-stakes game within the NJ Gold division. Although exhausted and injured, Verona fought on to the bitter end.

Verona walked out onto the field behind Honorary Captain Dominic Cappello. The 6-year-old had been diagnosed with a brain tumor back in February. (If you would like to donate to the Capello family, this is the GoFundMe campaign.)

The game commenced with a Morris Catholic drive being stopped by group tackles from the defense. Verona took the ball but was unable to take advantage of the situation. However, the defense held firm, and Verona regained possession. The drive initially looked to be a failure. However, a 65-yard pass to #23 Zach Garmont (wide receiver, cornerback) brought Verona to the red zone. Unfortunately for Verona, a blocked kick kept the score 0-0. A sack from #42 Marc Nigro (running back, defensive end) and #51 Andrew Boyle (tackle, defensive end) led to a Verona stop. Verona and Morris Catholic then went back and forth in control of the ball until a drive of successful Morris Catholic runs led to a touchdown. 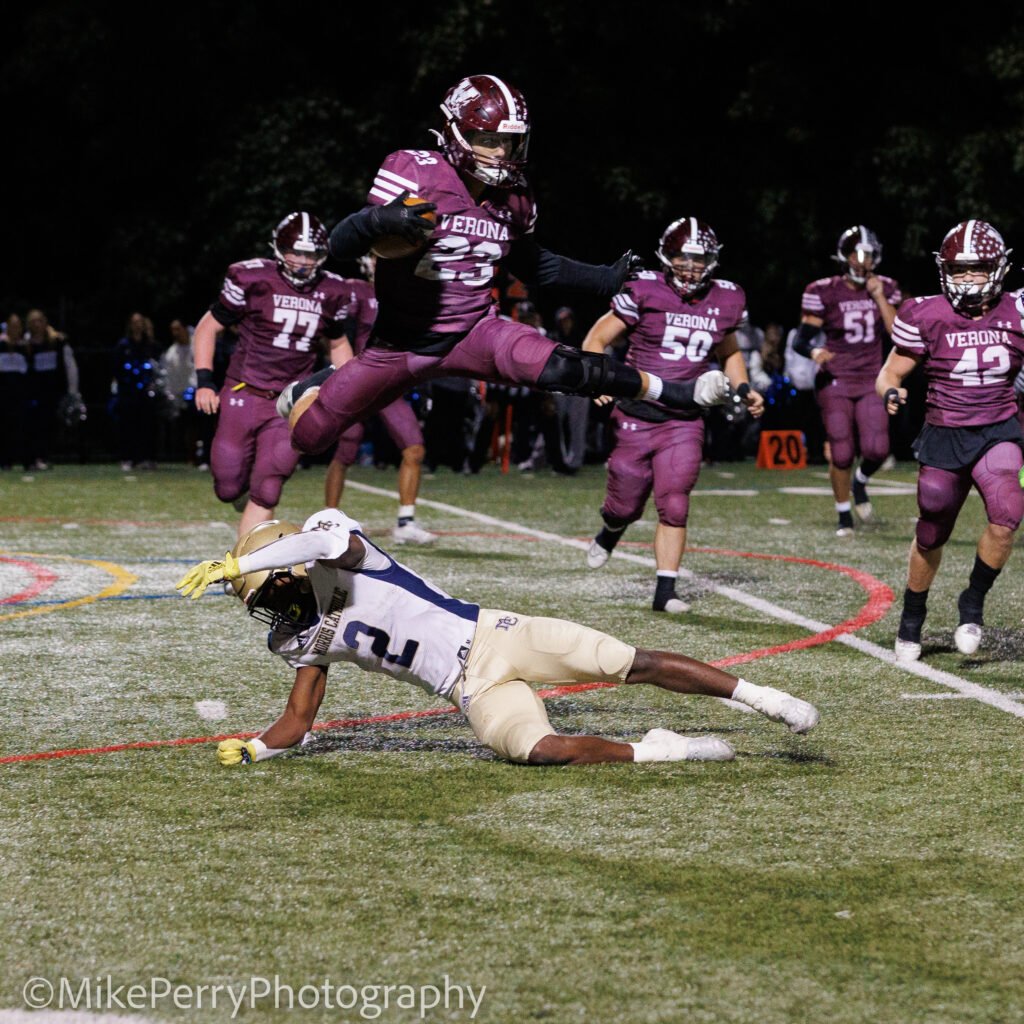 Verona quickly responded with a 20-yard pass to Garmont, followed by another 30-yard pass to Garmont for a touchdown. Tackles by captain Alex Rodriguez (wide receiver, quarterback, cornerback) led to a Morris Catholic punt. Regrettably, Verona quarterback #10 Connor Demasi threw an interception that was nearly returned for a touchdown. Only a sprint from the QB himself managed to push out the defender at the 3-yard line. Nevertheless, with a little over two minutes remaining, Morris Catholic ran it in for another touchdown. Near the close of the half, another interception was thrown. While throwing, Demasi fell with a hard blow to the legs. With Morris Catholic unable to score, the half came to a close.

The Marching Maroon and White performed its entire halftime show for the first time all season. Demasi was taken out of the game with a serious injury, but he later came back out to watch the rest of the game from the sidelines. The replacement for Demasi was Rodriguez. Captain Luke Cerle (running back, linebacker) was also ruled out for the rest of the game due to a knee injury. This injury dealt a crushing blow to Verona’s offense and defense as Cerle was a two-way starter. Cerle was replaced by #44 Bodie Maisano (running back, linebacker), who had already been filling in for him in the second quarter. 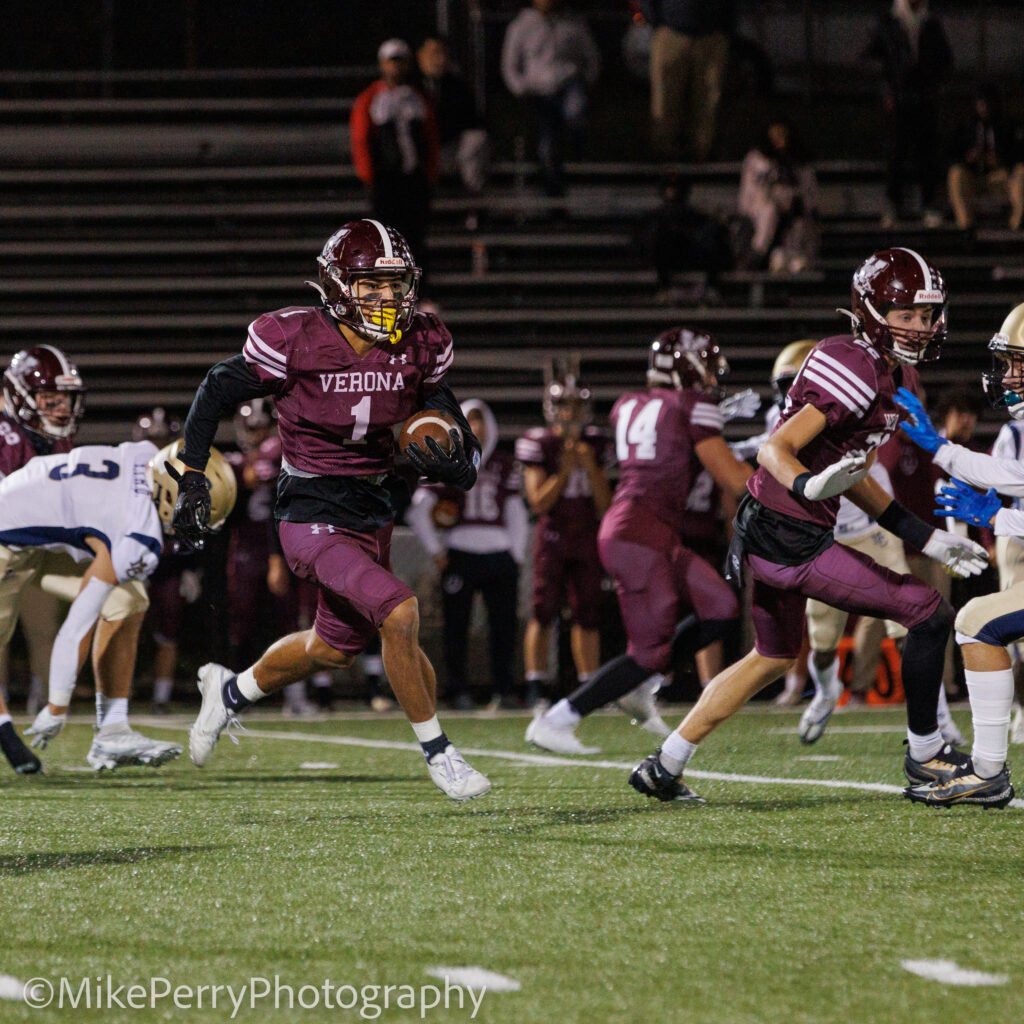 The third quarter kicked off with an electrifying Verona drive. A 20-yard run by Maisano was soon followed by a 10-yard pass to Garmont, followed by another 15-yard rush from Maisano. A scramble from Rodriguez ran it in for a touchdown. With an extra point, the score became 14-14. The third quarter then went back and forth between Verona and Morris Catholic in a standstill, with neither side being able to subdue the iron will of the other.

The fourth quarter again started in a deadlock. This continued until two and a half minutes remained in the game. Morris Catholic’s running back then snuck by the defenders and ran for a 35-yard touchdown. Verona failed to score, and the game ended with Morris Catholic kneeling the ball. 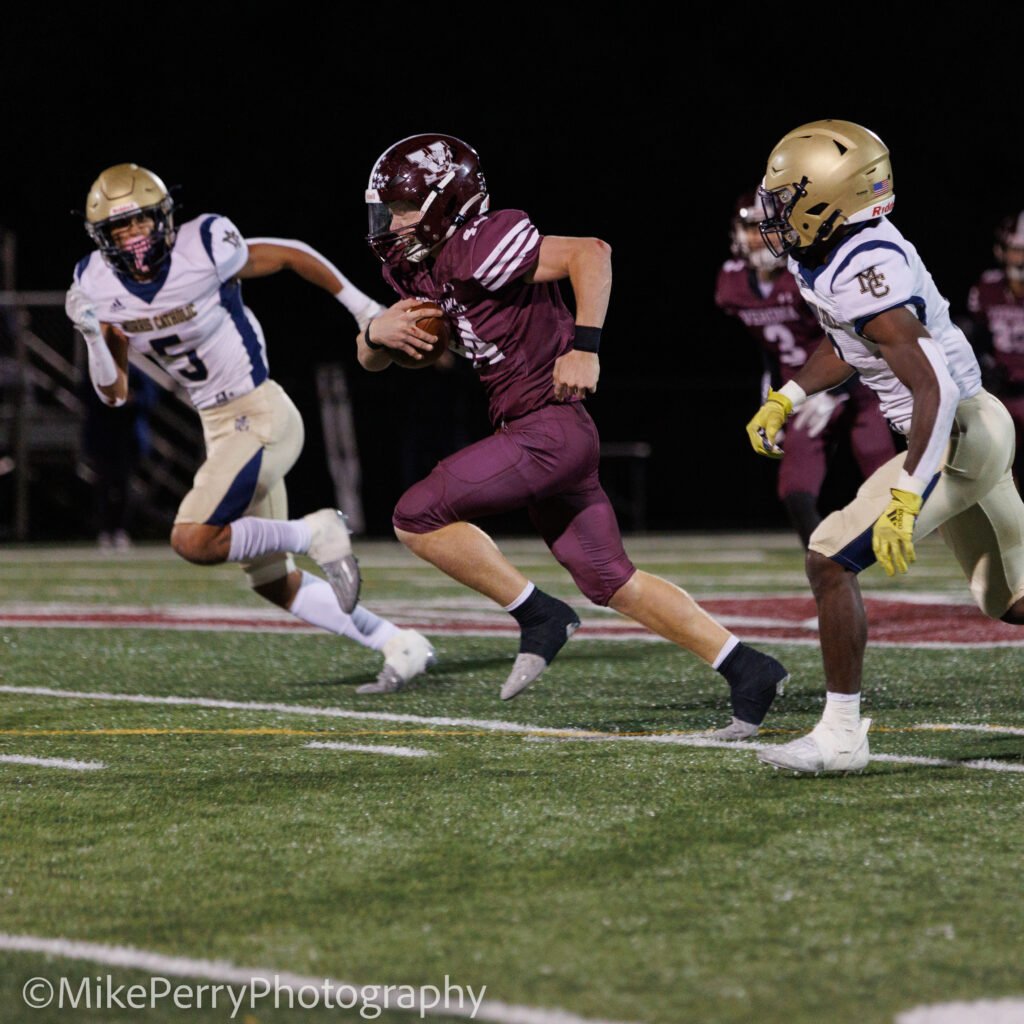 We asked Bodie Maisano how the team would use this experience to play Mountain Lakes, a so-far undefeated team. “We’re going have to stay confident and improve on our mental mistakes while also building on some really good plays we had last game,” he said. “This week of practice will be crucial for us to prepare everyone on the team for the upcoming game.” Although a freshman, Maisano echoes the words of seniors much more experienced than himself.

Verona will travel to Mountain Lakes to face off at 7 p.m. this coming Friday, September 30.