What’s Next For VHS ’14: A Travel Nursing Career 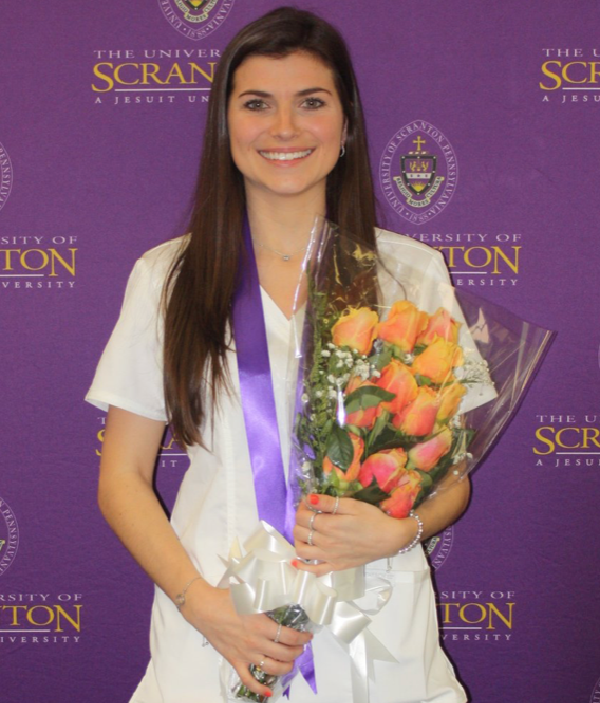 Colleen Farrell graduated Verona High School with the class of 2014 and got a bachelor of science in nursing from the University of Scranton in 2019, with a double major in public health. Since early last year, she has worked far away from either of those places after becoming a travel nurse.  Now based at Cedars-Sinai Marina del Rey Hospital just north of Los Angeles International Airport, has found in travel nursing an opportunity to learn aspects of her profession—and earn more as she does.

“I see myself staying out here for a while,” Farrell says. “The difference in pay is tremendous.”

She’s not alone in the experience. During the COVID-19 pandemic, there has been surge in demand for travel nurses, who are brought into hospitals under contracts that can be as short as six weeks. In addition to base pay, travel nurses get untaxed stipends for meals, housing and their travel to the new assignment, and they are free to pick up additional shifts at their assigned hospitals. In a recent story on travel nursing, The New York Times found that positions in Fargo, N.D., were offering $8,000 a week, while the going rate in New York was $10,000 or more.

Farrell didn’t set out to be a travel nurse. After graduating from Scranton, she initially worked at Morristown Medical Center, on a floor for people who had either just come out of heart surgery, or who were in the hospital for heart-related issues. But she was only a per diem nurse there, getting hourly pay while waiting for a full-time position. Some of her Morristown Medical colleagues were travel nurses, however, and that opened her eyes to some new possibilities. She reached out to a travel nurse staffing agency and, in January 2021, she headed west. Travel nurses must take assignments that are at least 50 miles from their home address, which for Farrell remains Verona.

Farrell’s first contract in the Los Angeles area was at Providence St. Jude Medical Center in Fullerton, California, working in a neurological unit with patients who had suffered traumatic brain injuries and floating in to its COVID unit as needed. Her agency, which had paid for her to get a California nursing license, had suggested she begin with a six-week assignment to get a feel for travel nursing, which she did. In addition to having to find her way to and from the hospital on California highways, she had to get to know new colleagues and new processes. “You learn a lot and you have to adapt,” she says.

Farrell was hoping to extend her time at Providence St. Jude, but the pandemic forced the hospital to cancel its travel contracts. “You sign a contract for a certain shift,” Farrell explains, “but the hospital can break the contract.” But with an agency at her back, she quickly landed a new contract at Kaiser Permanente Los Angeles Medical Center, near Hollywood, in its oncology unit.

Now at Cedars-Sinai Marina del Rey, she is gaining exposure to another aspect of nursing in its emergency room, which she says is exciting, but stressful. “With travel nursing,” Farrell says, “you float a lot so you get a feel for a lot of different units.” Farrell says she likes being in an operating room, but remains open to exploring other roles. “There is so much variety in nursing,” she says. (During the pandemic, many travel nurses haven taken on so-called crisis assignments in hard-hit hospitals; in these cases, the agency applies for a temporary nursing license for the new location.)

Farrell is about to give herself a break before her next contract starts: the whole month of March. “I like the flexibility of travel nursing,” she says. “I don’t have to apply for a vacation slot and then wait to hear back.” She’s not worried about paying the bills during the break because she has been able to save so much of her travel pay.

That flexibility will keep her in travel nursing for a while more, in California assignments. Says Farrell: “I’m happy that I made the jump.”

“What’s Next” is a series of profiles about what members of each Verona High School class do after graduation. MyVeronaNJ has been publishing the series since 2010 and you can read all of them here.