The Most Important Play Performance Ever 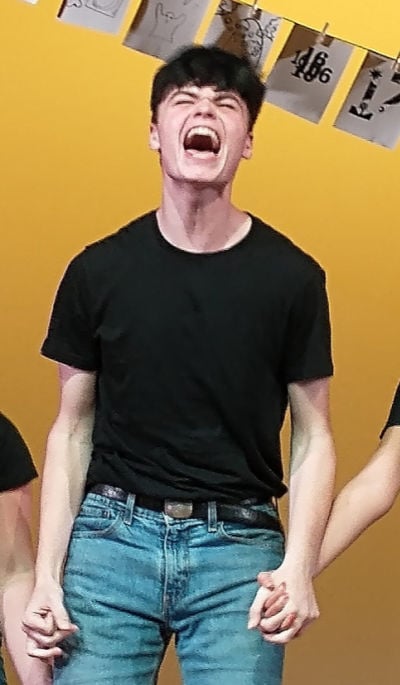 Back in the last century (the 1980s if you must know), I got involved in my high school theater group in my sophomore year as a member of the chorus of “Mame.” I was hooked. I was involved in most every production thereafter. In college I minored in drama (I really should have double majored, but…) I was involved on stage and off. For good and bad, theater shaped my life.

I wanted my son to be involved in theater when he was in the middle school, but he wasn’t interested. However he did attend several week long summer theater camps where within 4-1/2 days kids from 4 up would learn a “show” and then perform it on Friday afternoons. Were the shows perfect? No. Were they good? Not always, but it was less about the show and more about the learning and the experience.

When he got to high school, I “forced” him to be part of the drama club. It helped that he had drama as one of his electives. (Which was actually a backup elective; he had wanted an art class, but didn’t get it until his sophomore year.) He already knew the teacher/director. He auditioned for “Comedy of Errors.” He got called back (in fairness so did everyone else who auditioned). And during lunch period in the fall of 2019 he called me to say that he had gotten a small part. The only male freshman to do so. (Of course he was the only male freshman who auditioned.) The play was good; the experience was great. It exposed him to so many different kids. Many who became good friends.

There was no question that he would audition for the spring musical. Again, he got a small part (non-speaking). Again it was a great experience. The show closed on Saturday night and on Monday, the district announced they were shutting down for two weeks due to a thing called COVID-19. The school didn’t reopen until November 2020; and even then it was in a strange thing called “hybrid.”

High school theater didn’t stop because of the pandemic. It adapted and evolved. The spring 2020 one acts were recorded on Zoom. The fall 2020 production was a radio drama where parts were recorded from home and then pieced together; teaching students all about audio production.

There WAS a spring musical in 2021. It was not a traditional musical; instead it was a retrospective of Broadway through the ages. It was held at an outdoor venue in late May (when it shouldn’t have been below forty degrees at night, but it was). Students rehearsed outdoors. Students rehearsed masked. When they performed, they were unmasked, but stayed distant from each other and the audience. They competed with the honking of Canadian geese and planes overhead. It was theater. It was great. It was different.

This fall, a production of “Too Much Light Makes The Baby Go Blind (30 plays in 60 minutes)” was planned. This crazy, “neo-futuristic” production would include audience participation and no performance would be exactly the same, as the order in which the plays were to be performed would change based on audience requests. It was chosen because it COULD be done on line if need be. We prayed that it wouldn’t.

Students rehearsed masked in the auditorium. Working together on a stage where they had not officially been since March 2020. By the time the show opened last night, cast members were allowed to be unmasked on stage, but offstage (and they did come off stage) they put them back on. Audience members were masked at all times.

From the second the cast took the stage, excitement filled the room. You have never seen such exhilaration. It radiated out from the cast and exploded into an appreciative audience. When the show ended (with 2 minutes and 12 seconds to spare according to the digital timer on the stage), the cast erupted into cheers; they had done it. They had succeeded in giving a performance like no other. They had returned to the stage. They had returned home. It was a moment of complete jubilation.

I am no photographer, but I took photos as the cast took their bows. I have cropped out everyone else in this photo except for my son. His expression says it all to me.

This was the most important play performance ever; for him, for his fellow cast members, for the crew, and for every member of the audience. We are alive. We laugh. We are filled with emotion. Theater gives this all to us and so much more.

The journey may not be completely over, but we are home. We are home.

Beth Shorten is a life-long resident of Verona. For more than seven years, she has been chronicling life here on her personal site, Bfth’s Boring Blog.

“Too Much Light Makes The Baby Go Blind” will be performed on Friday, November 19, and Saturday, November 20, at 8 p.m., and at a matinee on Saturday at 2 p.m. Tickets are $10 for adults and $5 for students and are available online.