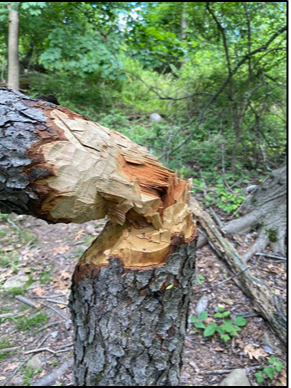 The Hilltop Conservancy, the nonprofit that has led the revitalization of the green space on Verona’s western ridge, has posted to Facebook about vandalism on the Hilltop.

The Conservancy has found evidence that someone is setting fires after dark and has been chopping down natives trees with an ax. There is also a substantial amount of litter being left at the site, instead of being put in  the trash cans at the Verona Community Center below the Hilltop, or carried back home.

Given the low level of rain this summer, the campfires could pose a significant danger to the Hilltop woods and the nearby homes and apartments. But the destruction of trees is particularly galling, given the work that the all-volunteer Conservancy has been doing for much of the past decade to restore the Hilltop’s ecosystem.

“We *think* this is being done by a few not-so-bright juveniles,” Conservancy Treasurer Theresa Trapp wrote on Facebook, “but the count so far is over two dozen native black cherry, white ash, beech, red oak and silver maple trees. If you see any youngsters hacking away, or building a fort, or clearing a space in the middle of the woods, please speak up — ask them what they’re doing, and tell them that they’re hurting the preserve and wildlife if they cut down live trees.” 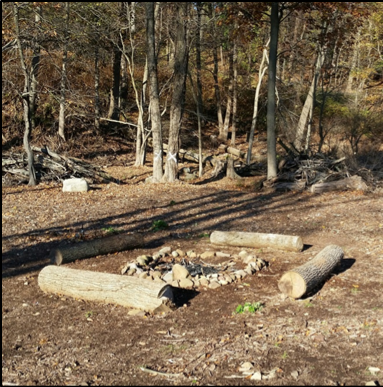 The Hilltop Conservancy’s mission is to restore the wildlife habitat in the Hilltop’s grasslands, forests and wetlands and make them a destination for hikers, birders and other nature enthusiasts. Its first restoration project was a 15-acre grasslands site. It then restored a 3-acre area that was once the site of the power plant, laundry and equipment garage of the former Essex Mountain Sanatorium, a hospital for tuberculosis patients at the beginning of the 20th century. After the 5-acre Prisoner’s Pond project now underway is completed, the Conservancy hopes to restore a 6-acre wetlands to the north.

Trapp is asking everyone using the Hilltop for recreation to carry out their trash, and if they see fires being set, to report it to the police. “You don’t need to know any number other than 9-1-1,” Trapp wrote, “and then ask to be transferred to the County Sheriff’s Department dispatcher.“

There is one other thing the public can do to help the Conservancy: Join it. Trapp says that memberships and donation are “way down” this year. “Please consider donating to help us continue our work of caring for and improving the Hilltop Reservation,” she wrote. “Your donation or membership dues will help us fund purchases of trail maintenance tools, native wildflower seed and other needed supplies.”

The link to donate is here.