A Meatball Battle For The Ages 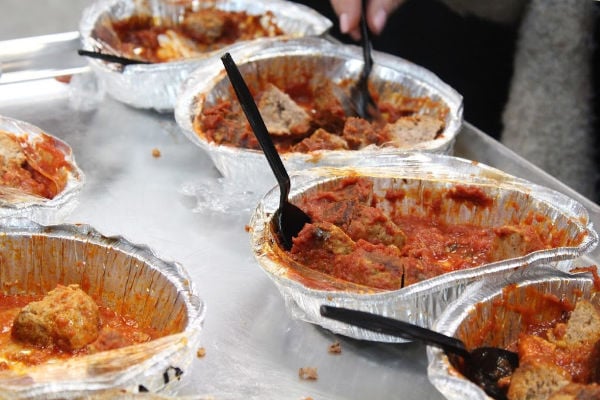 It was partly cloudy in Verona yesterday and, if you were inside Lakeside Deli, there was a very great chance of meatballs.

The extended Hill family, who have a hand in Lakeside, Eight Hills Caterers, Dekko Salon, the Fred Hill Sports Academy and Academy Apparel, held a contest on Sunday to see who makes the best version of the meatballs that matriarch Evelyn Hill served at their Sunday suppers for 50 years. A contest with a strict judging format and four celebrity judges in official uniforms, no less.

The contest grew out of a family birthday dinner at Tracey Hill’s where meatballs were served. “These aren’t Nanny’s,” someone remarked. Tracey and her nephew Brian Hill had done the cooking and the ensuing conversation about meatball making quickly got competitive. “When we had cement meatballs, we had to correct it,” said Fred Hill. “They didn’t turn into cement until it turned into a competition,” fired back Tracey. Yes, the Hill family is as competitive at food as they are at sports and business.

So Tracey proposed a cook-off in which family members would have to submit four plain meatballs and four in gravy, and she recruited four judges: Ariane and Michael Duarte of Ariane Kitchen & Bar, Al Lombardi of Lombardi’s Bar & Restaurant in Cedar Grove, and his mother, Eileen Lombardi. She was, someone joked, the official Italian grandma judge. 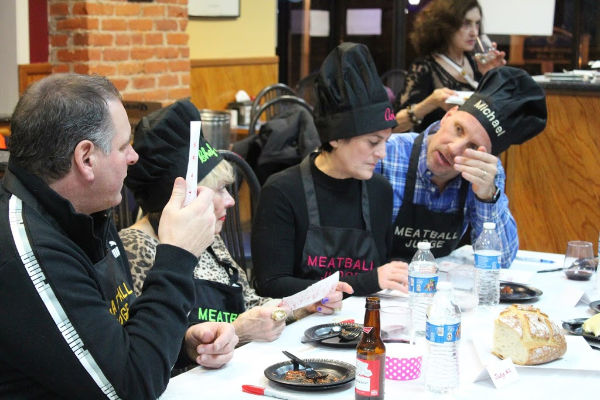 That’s a significant point because while Mrs. Hill is a grandmother to many (and the captain of Team Nanny), she is not Italian-American. Her roots are Polish, Scottish and Irish, and when the family was just starting out in East Orange, Mrs. Hill learned to make meatballs and gravy from an Italian-American neighbor, Sue Marciano. “She told my mom, ‘you have six kids, you have to make food that will go a long way’,” said Karen Hill Jandoli. Meatballs became the Sunday staple for Nancy, Fred, Linda, Jim, Tracey and Karen, their friends, and now, their children. “We were blessed to eat great food all our lives,” said Jim.

A clan that large means that there were plenty of teams for the competition: seven with direct family ties* and a secret eighth team. They traipsed into Lakeside precisely at 5 p.m. with meatballs in containers bearing only their assigned team number. The judges–wearing chef’s aprons and toques embroidered for the occasion at Tracey Hill’s Academy Apparel–sat down to their plates and score sheets.

Several contestants did attempt to influence the judges, who waived it off. “Thank God we were friends before the tasting,” said Michael Duarte. And, just like the celebrity cooking shows on TV, there were occasional moments of disagreement between the judges. “I’m getting yelled at because I’m judging wrong,” said Al Lombardi, gesturing toward his mother. When some of the judges flagged after the first round of plain meatballs, Karen Hill Jandoli came to the rescue. “They need a palate-cleansing sorbet,” she proposed, and then promptly ran out to Towne Scoop, located in the same building.

And then there was the wait for the big decision. “The judges are in seclusion,” announced Fred Hill. “We’re waiting for the white smoke.” (For the non-Catholics in the audience: When a new pope is elected, the Vatican sends white smoke up the chimney in the Sistine Chapel.) “Do you have a trophy?” Nancy Hill Apisa asked Tracey Hill. “Do you doubt me?” Tracey replied. 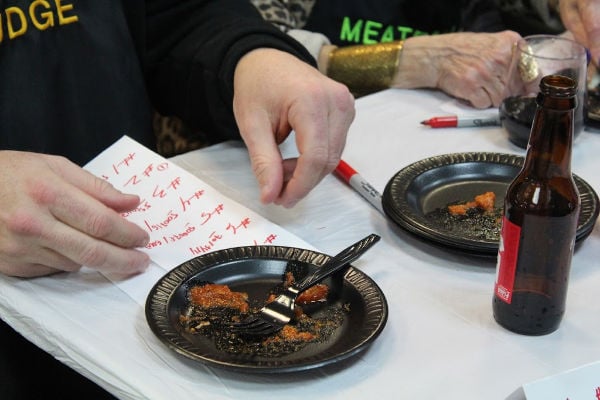 The team members and their guests got to taste all the meatball as they waited for results, which led to a few sibling squabbles. “Now, now, everybody’s a winner,” said Nancy Hill Apisa in her best former Laning elementary school teacher voice. “We all need to be good sports.” But mostly there was just a lot of laughing, which has been in short supply in the Hill clan in the past year. Patriarch Fred Hill, the long-time Rutgers baseball coach, passed away last March and Karen’s husband Jimmy Jandoli died in May.

Mrs. Hill was serene as she waited. “There were three that were not mine,” she said. “The way I was taught by my neighbor was pork, beef and veal. For the gravy, you fry the paste in salt pork. I use a lot of garlic and onions, and only whole Tuttorosso tomatoes that I crush myself in the blender.”

And then came the moment of truth. Sort of. Just like at the Oscar’s, homage first needed to be paid to the accountants who tabulated the results, who in this case were all family members. “The results were sealed in that envelope last week,” Jim Hill joked. Praise was given to several teams whose meatballs rose in the eyes of the judges when they were sauced. The meatballs, not the judges.

The ultimate winner? Team Nanny. But then you knew that’s how it would turn out, right? 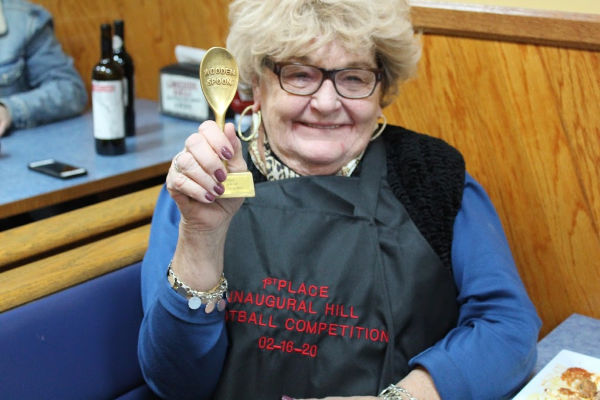