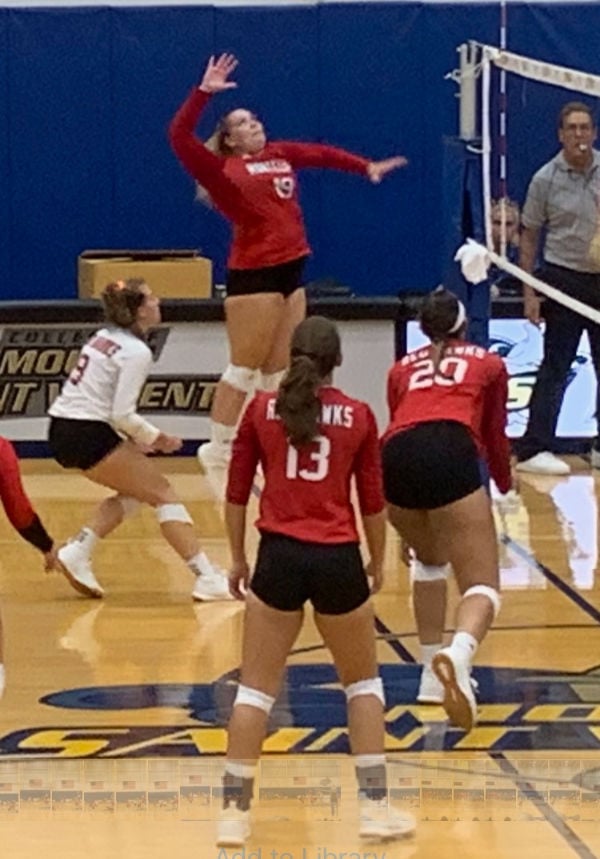 Carly Waterman, a sophomore outside hitter at Montclair State University and a 2018 graduate of Verona High School, has been named to the American Volleyball Coaches Association Northeast All-Region Team.

Waterman was chosen to the 15-member team and becomes the second Red Hawk in program history to be selected All-Region by the AVCA joining Hayley Merrill, who was chosen Honorable Mention for the 2016 campaign. She helped lead the Red Hawks to a 21-10 mark, the team’s eighth 20-win season in program history.

The sophomore was tabbed as a First Team All-New Jersey Athletic Conference selection after leading the Red Hawks with 376 kills while adding 39 service aces and 297 digs. Waterman posted 13 double-doubles and was held to single-digit kills in just six of 31 matches. The Verona native also recorded a team-best 88 kills in seven conference matches and notched 59 digs within NJAC action.

In a four-set win over Rutgers University-Camden, Waterman registered a career-high 22 kills while also chipping in 13 digs on the defensive end. Against Baruch College, the Garfield, NJ native hit a blistering .500 with 11 kills and just one error before slugging .474 in a victory over Moravian College on October 12.

Defensively, Waterman had 10 or more digs on 14 occasions, including a season-best 21 in a setback against the University of Rochester on November 1. She also racked up four block assists in a five-set victory against Keene State College. Waterman filled the stat sheet against the Stevens Institute of Technology, a team heading to the NCAA Tournament this weekend. She notched 17 digs, 12 kills, and five service aces as the Red Hawks downed the Ducks in straight sets.

The two-time All-NJAC and 2018 NJAC Rookie of the Year has posted 692 kills, 530 digs, and 64 service aces over two seasons at Montclair. After just two years, she is 12th all-time in kills, 11th in attacks, and 13th in hitting percentage in school history.