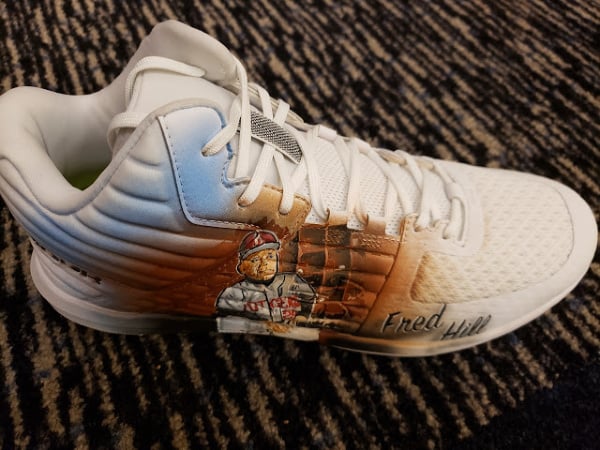 It’s Players Weekend in Major League Baseball, and if you are watching the Mets games against the Braves, see if you can catch a glimpse of the cleats worn by the Mets’ third baseman, Todd Frazier. They are a special tribute to Verona’s late great baseball coach, Fred Hill.

During Players Weekend, the players can swap their regular team uniforms for jerseys and other gear that reflect their personal message and style. Frazier chose to make a statement about Hill, whom he played for at Rutgers University and who passed away this past March at age 84.

“He was a special man that helped me tremendously,” Frazier says of Hill. “I wanted to honor him this weekend. He will always hold a very special place in my heart.”

Fred Hill led teams to 1,089 collegiate wins during his coaching career, including 941 in the 30 years he spent with the Scarlet Knights. Hill was a member of American Baseball Coaches Association Hall of Fame and the Rutgers Athletics Hall of Fame. A resident of Verona for more than 40 years, Hill retired from Rutgers in 2014 and was inducted into its Hall of Fame in 2015. The university dedicated a new training complex to him in 2017.

Hill’s family say they are touched by Frazier’s choice for Players Weekend. “It speak volumes about the respect that all the players had for him as a coach,” says Jim Hill, “and about how he prepared them for the future.”