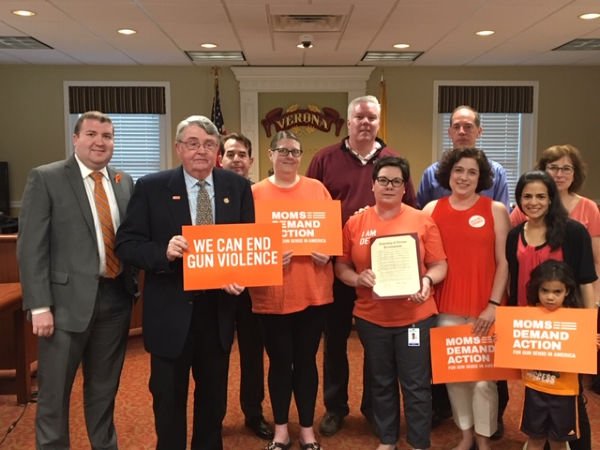 Today, Friday, June 7, is National Gun Violence Awareness Day, a day created by Everytown for Gun Safety to draw attention to the impact of gun violence in America and rally support for measures to reduce gun violence. The Verona Town Council recognized the day with a proclamation at its Monday meeting.

Holding the proclamation is Verona resident Katy McClure, who almost lost her sister to gun violence in 2006 and has become a member of  Moms Demand Action for Gun Sense in America, a group founded one day after the the murder of 27 students and teachers at Sandy Hook elementary school in 2012. McClure, and incoming Council member Christine McGrath, are members of the local chapter of Moms Demand Action.

According to Everytown for Gun Safety, 100 Americans are killed with guns every day and firearms are the second leading cause of death for American children and teens. Access to a gun also substantially increases the risk of death by suicide.