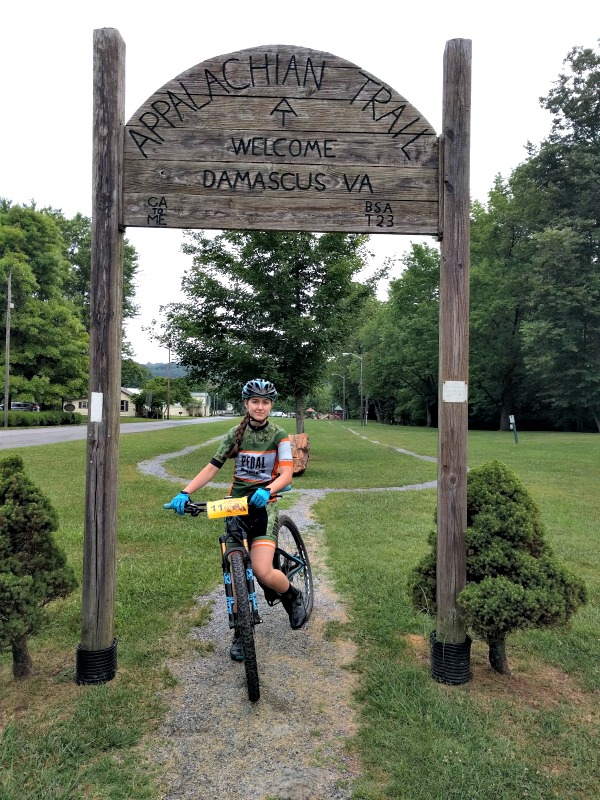 Verona father and daughter Stephen and Nina Machnowski competed this past weekend in the Iron Mountain 100K, a 100-kilometer (54-mile) back-country endurance mountain bike event in Damascus, Va., and both finished among the top competitors in their respective categories.

Stephen Machnowski got 11th place the open men category. “Great way to see this spectacular wilderness area,” he said. The race takes place in the Mount Rogers National Recreation Area, which is located in southwestern Virginia near the border with Tennessee and North Carolina. “The elevation gain during the race was like going from the lowest point in Verona to the highest about 50 times,” he added.

Nina Machnowski, who will be a junior at Verona High School in the fall, took 7th place in open women. Here are her thoughts on the race:

“Hurricane Mountain, Skulls Gap, Creeper Trail, that doesn’t sound foreboding at all! The Iron Mountain 100k started with over 100 racers in downtown Damascus, just a stone’s throw away from Tennessee.

About 2 miles up the road we filed into a rail trail which we followed down for another 6 miles. Soon enough, we made a left onto the Beech Grove trail where we trekked up the steep, rutted out singletrack. That first technical climb really opened my eyes to what Virginia wilderness is. It was absolutely demoralizing having to alternate on and off the bike up to the first aid station at mile 13. Fortunately, there was somewhat of a break for about 3 miles on Beartree Gap road which I used to my advantage. Before re-entering another singletrack climb though, the sky opened and there was a downpour for half an hour. The mud and wet moss definitely added to the difficulty of the course. I was already starting to doubt my ability to finish the race at mile 20 because of how physically and mentally brutal the terrain was but I was able to push through and persist.

One of the longest climbs called the “gravely death climb” was at around mile 25. I would see sunlight and think that it was the peak but it would just be another turn going up the mountain. And another. And repeat. With my focus ahead, I dug deep and stopped hoping to reach the summit. These kinds of climbs are what I’ve been training my body for and giving up was not an option. Finally, I knew I was at the top when I was riding at the same level as the canopy. At 4,300 ft above sea level, the view was stunning and truly reminded me why I love this sport… but that wasn’t the end. This was only one of the many 1,700 ft climbs I had to conquer.

The descents in between were equally as punishing. Many high-speed downhill sections were off-camber with a cliff to one side. There were plenty of diagonal roots and jagged rocks ready to throw me off my bike or slice my tire. There was no room for error. Luckily, my experience with technical riding gave me an edge and I didn’t have any mechanical difficulties. My bike, a Pivot Mach 429SL, was extremely tuned for this kind of terrain. It was all up to me to ride cleanly and carefully. There was one field that we rode across around mile 40, just before the last rigorous climb, where I was surrounded by yellow daisies. It was moments like these when I felt so lucky to be in nature and almost forgot about the whole competition. Besides, this was a race of survival.

The last descent was the infamous Iron Mountain trail all the way down at full speed for 10 minutes and back into the town of Damascus. After overcoming a total elevation of 9,000 ft over 54 relentless miles, I couldn’t even believe it when I saw the timer reading “7 hours 26 minutes” at the finish line. I was in tears after realizing what I had just accomplished. Not only did I complete arguably one of the hardest national ultra endurance races of the series, but I also took a 7th place. I’ve never been more proud of myself. After the Iron Mountain 100k, I feel like I can do anything with my mountain bike.