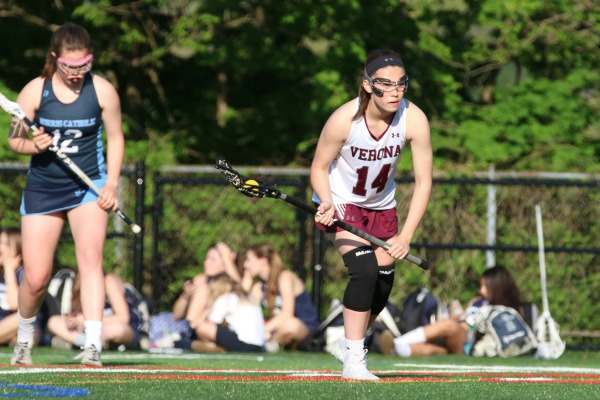 Having to wait nearly a week to play after a tough 9-8 loss to Montclair High School on May 2, Verona came out firing from the start against visiting Morris Catholic (8-5). The Lady Hillbillies surged to a 7-2 halftime lead, then held off a second half run by the Crusaders and closed the game forcefully to carve out a 15-8 home win to improve their overall record to 10-6.

Senior midfielder CC Courter was next with three goals and an assist to go along with a personal best six draw controls and three forced turnovers. Junior attack Julia Mackey pitched in with a game-high four assists, working well with Ashley throughout the game to push Verona out to a lead that they would hold the entire game, despite a brief scare in the second half when the Crusaders were able to narrow the margin to 9-7 with 13:05 left in the game.

Julia Mackey had four assists in the @veronaglax win over Morris Catholic and several were to Maggie Ashley for scores. This one was Maggie’s fourth. pic.twitter.com/wA6alDebzX

Sophomore goalie Skyler Freedman made her five saves count, making key stops during the second half to slow the Morris Catholic second-half run. 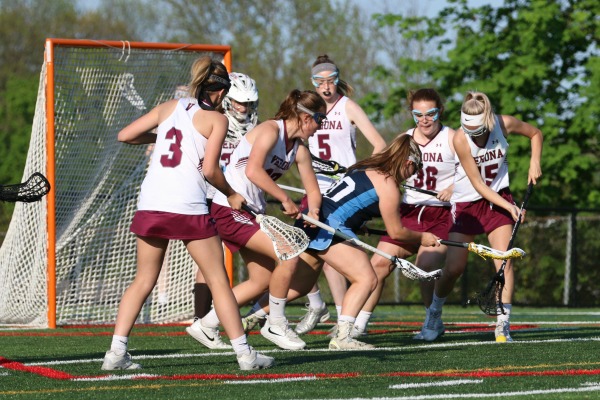 Draw controls were a key to the Hillbillies winning effort, and sophomore midfielder Maggie Lonsinger, in addition to scoring a goal and two assists, was a dominant presence on the circle, recording a game-high 10 draw controls. Juniors Sara Carlucci and Ally Madigan, active on both ends of the field throughout the game, also recorded three points, each notching two goals and an assist. Junior attack Emily Coppola, senior attack Ashley Nigro and defender Lara Tole each recorded a score, and Coppola captured two timely ground balls to keep Verona in possession at key points in the game, eventually leading to goals for the Hillbillies.

Draw controls were key to the Hillbillies’ win over Morris Catholic and Maggie Lonsinger had 10 of them. pic.twitter.com/DKBiyB5nvE

Tole, junior Erin Kiernan and sophomore Clara “Nobody beats the Frizz” Frizzi played a harassing style of defense that was particularly effective when the Crusaders would try to transition the ball from defense to offense throughout the contest.

Verona goes on the road for their last regular season game to face a strong Mount Olive squad on Friday, May 11 before state playoffs start on Tuesday, May 15. 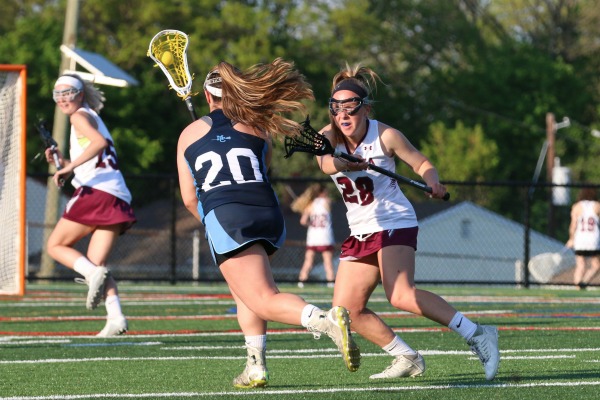