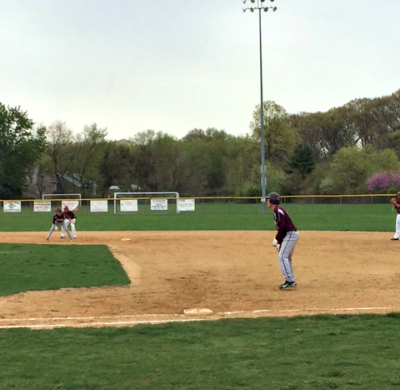 Yes, it was a small moment, but it’s the kind of thing that is gold to parents.

Like many of Verona High School’s teams, the baseball team has siblings on the roster: Kevin and Wade Kistner, who both also played on the championship basketball team, and Nick and Anthony Zamloot. Monday’s VHS win over Bloomfield, however, included a view of both Zamloots on base at the same time.

Anthony Zamloot, who is a sophomore, actually had the hot bat in the 4-2 Verona victory, delivering two singles and three RBI. That brought his record to eight hits, two runs scored and nine RBI on the season. Brother Nick, a senior, has seven hits, two runs scored and three RBI to his credit. When they are not in scoring position,  they can still be fairly close on the field, with Anthony at third base and Nick in left field.

Of course Monday’s game was, as always, a team effort for Verona, with Steve Priscoe contributing an RBI-single with a run scored and Ian Metzger pitching an eight-hitter with two earned runs, one walk and two strikeouts.

VHS baseball has an 8-5 record so far, and is 3-4 in its league. Today’s game against Seton Hall Prep was postponed until April 29. The Hillbillies are scheduled to host Montclair High School on Wednesday, with a 4 p.m. start.